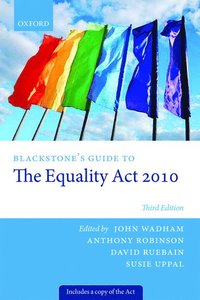 Blackstone's Guide to the Equality Act 2010

av John Wadham
Häftad Engelska, 2016-11-10
938
Köp
Spara som favorit
A fully revised edition of Blackstone's Guide to the Equality Act 2010, covering all recent developments including amendments to the Act itself and new case law clarifying or interpreting the Act. Combining the full text of the Act, as amended, with expert narrative, this book is an invaluable resource for all who encounter this legislation.
Visa hela texten

Phillip Taylor MBE and Elizabeth Taylor, Richmond Green Chambers Review from previous edition The Act is an important new step towards building a society based on equality and human rights by rationalizing and modernising the law. So, the 4 expert authors, John Wadham, Anthony Robinson, David Ruebain and Susie Uppal, give us the additional tools to help us through the new maze and they do the job brilliantly.

John Wadham is a solicitor and an independent consultant for the Council of Europe, the United Nations Development Program, the Commonwealth Secretariat, and UK charities. He is also the Chair of the UK's National Preventive Mechanism (OPCAT). Previously he was the Executive Director of INTERIGHTS (the International Centre for the Legal Protection of Human Rights), General Counsel for the Equality and Human Rights Commission (EHRC). He is the co-author of the Blackstone's Guide to the Human Rights Act, Blackstone's Guide to the Freedom of Information Act, and Blackstone's Guide to the Identity Cards Act. John was previously the Director of Liberty (the human rights organization). John is an Associate Member of Doughty Street Chambers, a Visiting Senior Research Fellow at Kings College London, a Visiting Fellow at the University of Bristol, and a member of the Human Rights Committee of the Law Society. Anthony Robinson is a Consultant Solicitor with Excello Law and Scott Moncrieff & Associates. He set up and is the Managing Partner of the Human Rights & Equalities Consultancy. He was the Director of Casework and Litigation at the EHRC. Prior to this Anthony was the Director of Legal Services at the Commission for Racial Equality (CRE). Anthony has had an unusually varied career. His professional interests range from human rights, equality and discrimination, public law, employment, pensions, education, inquests, data protection, freedom of information, and mediation. He has dealt with some of the most significant equality, human rights, and public law cases in his time in the two commissions. He was one of the founders of Euroneb that became Equinet (the European Network of Equality Bodies). He has published widely on these areas and is a regular conference speaker. Anthony is a CEDR & TCM accredited mediator. David Ruebain is Chief Executive of the Equality Challenge Unit, a policy and research agency funded to advance equality & diversity in universities in the UK and colleges in Scotland and England. Prior to that, he was a practicing solicitor for 21 years; latterly at the Equality and Human Rights Commission and before that at Levenes Solicitors. David is a member of the Advisory Group of the Office for Fair Access, an equality adviser to the FA Premier League, a member of the Rights & Justice Committee of the Joseph Rowntree Charitable Trust, and a Member of the Editorial Board of Disability and Society journal. He is the winner of RADAR's People of the Year Award for Achievement in the Furtherance of Human Rights of Disabled People in the UK, 2002. In 2006, he was listed as one of 25 Most Influential Disabled People in the UK by Disability Now Magazine. In 2013, he was listed in the Disability News Service's <"Influence Index>" and is listed in the Disability Power List, 2014 and 2015. Susie Uppal is the Chief Executive of the Press Recognition Panel, the independent body set up to ensure that any organization which regulates the press is independent, properly funded and able to protect the public, while recognizing the important role carried out by the press. Susie is a solicitor and was previously Senior Ombudsman at The Legal Ombudsman, Director of Legal Enforcement at the Equality and Human Rights Commission and before that Head of Enforcement for the Gambling Commission. She has also conducted forensic investigations for the Solicitors Regulation Authority, served as an independent member of the Regulatory Affairs Board of the Law Society and was a Commercial Litigation solicitor in private practice for many years. In addition to leading on a number of high profile investigations, inquiries and actions in domestic courts and European courts Susie has a wealth of experience in building and leading organizations through transformational change.