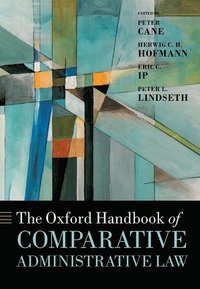 Helene Mansilla-Scholes, Law Society Gazette [T]his book examines, discusses and widens the understanding of a broad range of historical, contemporary, and future issues in administrative law ... The handbook is also packed with thought-provoking facts and instructions for research. It analyses and expands methodologies and cross-system content, and serves as a guide to the study of global legal systems. The relationship between comparative administrative law methodologies and other associated fields, such as
political science, is also explored in a way that promotes interdisciplinary research ... The Oxford Handbook of Comparative Administrative Law will be of great interest to comparative administrative lawyers, a valuable addition for public lawyers and highly recommended reading for students.

Peter Cane divided his academic career between Corpus Christi College in the University of Oxford (1978-1997) and The Australian National University (1997-2016), where he held the posts of Professor and Distinguished Professor of Law. In 'retirement' he is a Senior Research Fellow of Christ's College Cambridge (where his wife, Jane Stapleton, is Master) and Yorke Distinguished Visiting Fellow in the Cambridge University Law Faculty. He is a Corresponding Fellow of the British Academy and author of books including Controlling Administrative Power: An Historical Comparison. Herwig C.H. Hofmann is Professor of European and Transnational Public Law and head of the University of Luxembourg's Law Department. He was formerly a Lecturer in Law at Trinity College Dublin and has held visiting positions at institutions in Europe, the US, and Asia. He is the author and co-author of books in the field of EU and comparative public law. Recent volumes include: Administrative Law and Politics of the European Union, Metamorphosis of the European Economic Constitution, Specialised Administrative Law of the European Union, and State Aid Law of the European Union. Hofmann is one of the coordinators of the Research Network on European Administrative Law (ReNEUAL) and one of the co-authors of the ReNEUAL Model Rules on EU Administrative Procedure. Eric C. Ip is an Associate Professor of Law at the University of Hong Kong (HKU) and a Fellow of the Asian Institute of International Financial Law. He is the author of Hybrid Constitutionalism: The Politics of Constitutional Review in the Chinese Special Administrative Regions, and Law and Justice in Hong Kong. Prior to joining HKU, he taught at University College London and the Chinese University of Hong Kong, where he served as Assistant Dean of the Faculty of Law. Peter L. Lindseth is the Olimpiad S. Ioffe Professor of International and Comparative Law at the University of Connecticut School of Law, where he is also Director of International Programs and Co-Director of the Program in Corporate and Regulatory Compliance. His research focuses on comparative administrative law, European integration, and legal history. His books include Power and Legitimacy: Reconciling Europe and the Nation-State, and his articles have appeared in the Columbia Law Review, Contemporary European History, the European Law Journal, and the Yale Law Journal, among other publications. He holds a B.A. and J.D. from Cornell and a Ph.D. in European history from Columbia.