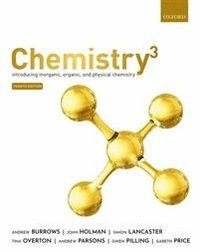 Dr Rossana Wright, University of Nottingham Review from previous edition It is a great textbook for first year courses with really good use of visual aids and excellent provision of worked examples to illustrate the concepts and their applications. It is a perfect transition from A-Level to Higher Education Chemistry.


Dr Gareth Owen, University of South Wales Chemistry3 is the best introductory chemistry textbook currently available. It is well written, excels in clarity of presentation, and is an outstanding book from the student learning perspective. All of the concepts covered are well explained and supported by excellent artwork. This is a book that all first and second year chemistry undergraduates should have.


Dr Loretta M. Murphy, Bangor University This is an exemplar modern chemistry resource with a very rounded pedagogical approach to engaging students and supporting staff in delivering key chemical concepts and supporting facts. It is a one stop shop for mainstream chemistry fundamentals.


Adam Stubbs, student at Newcastle University A fantastic all-round reference for university-level chemistry. It is a perfect way to bridge between school and university.


Christian Nichol J. Geronimo, student at Dublin Institute of Technology Chemistry3 is the best university chemistry text book for first and second year science students. It is comprehensive and contains all the fundamentals for chemists to know- from analytical to organic chemistry. It is also a student friendly book with tons of pictures and applications of chemistry in the real world.


Rebecca Snelgrove, student at Keele University This material is fantastic and should be used alongside courses. The level of detail is exactly right for undergraduate courses and the colour coding of the boxes for worked examples and summaries make them really easy to find. There are lots of questions for you to have a go at which makes it easy to practice the new skills the book is helping to teach.


Jelte van der Valk, student at the University of Groningen, the Netherlands Plenty of facts and figures are scattered throughout the text which makes reading not solely an educational, but also a fun activity. The examples of real life chemistry applications maintain the connection between theory and practice. The interdisciplinary approach provides a broader chemical understanding while not losing the comprehensiveness of the book. In short, a good all-in-one textbook for first-year students in chemistry.


Michelle Rasmussen, student at the University of Roskilde, Denmark The topics are very thoroughly explained and are at exactly the right level for the student. There are many great examples illustrating the topics. It is a great book to read and study from as a student starting university. This is definitely a book I would buy, read and return to, when I needed an explanation for some basic chemistry.

Andrew Burrows is Professor of Inorganic Chemistry at the University of Bath. He completed his first degree and doctorate at the University of Oxford and worked in Strasbourg and Imperial College London before moving to Bath, where he is currently Head of Department. He has taught many aspects of inorganic chemistry, though his current courses focus on s- and d-block chemistry. His research interests are in porous materials such as metal-organic frameworks and he has published over 160 papers. John Holman is Emeritus Professor in the Chemistry Department at the University of York, Past-President of the Royal Society of Chemistry (2016-2018), and Senior Adviser in Education at the Gatsby Foundation. He was the Founding Director of the National Science Learning Centre from 2004 until September 2010, and adviser to the English government as National Science, Technology, Engineering and Mathematics (STEM) Director from 2006 until September 2010. He has taught learners of chemistry at both school and undergraduate level, has created curricula and written books for science learners up to and including undergraduates, and was the founding director of the Salters Advanced Chemistry programme. In 2014 he was named by the Science Council as one of the 100 leading practising and inspirational UK scientists and in the same year won the Royal Society of Chemistry's Lord Lewis Award and the Royal Society's Kavli Education Award. In 2010 he was knighted by the Queen for services to education. Simon Lancaster has taught Chemistry at the University of East Anglia since his appointment as a lecturer in 2000. He won a National Teaching Fellowship and an RSC Higher Education Teaching Award in 2013 for 'blurring the boundaries between the internet and the lecture theatre'. Simon was promoted to a chair in Chemistry Education in 2014. He was selected as one of RSC's 175 face of diversity in 2016 and championed inclusion and diversity as President of the Education Division Council from 2017-2020. He is a passionate advocate for active learning, in demand as a keynote speaker well beyond the chemistry arena. He has led UEA's chemistry provision as Director of Learning and Teaching since 2015 and has accelerated their implementation of blended learning in response to the Covid-19 pandemic. Tina Overton has been Professor of Chemistry Education at the University of Hull and Monash University and was Director of the University of Leeds Institute for Teaching Excellence. She has published widely in chemistry education and science education research and is the author of several textbooks. Tina has been awarded the Royal Society of Chemistry's Higher Education Teaching Award, Tertiary Education Award, and Nyholm Prize, and the Royal Australian Chemistry Institute's Fensham Medal. She is a National Teaching Fellow and Senior Fellow of the Higher Education Academy. Andy Parsons is a Professor of Organic Chemistry at the University of York. His teaching has been recognised by a Royal Society of Chemistry Higher Education Teaching Award. He is a Senior Fellow of the Higher Education Academy (HEA) and, in 2018, was awarded a prestigious National Teaching Fellowship by the HEA in recognition of his inspirational and innovative approaches to teaching. In 2017, he delivered a first ever University of York MOOC, called Exploring Everyday Chemistry, which has attracted over 20,000 learners from more than 140 countries. Gwen Pilling is a former Fellow in the Department of Chemistry and member of the Science Education Group at the University of York, with experience of teaching chemistry at both secondary school and undergraduate level. She was Director of the Salters Advanced Chemistry Project and Chief Examiner for the OCR Chemistry AS and A Level Examinations from 1992 to 2002. Her main areas of interests were curriculum development in chemistry in the post-16 school age group, supporting teachers through curriculum change, the interface between secondary and