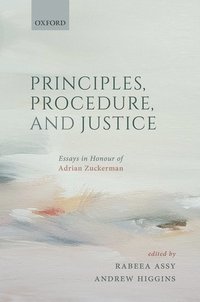 Essays in honour of Adrian Zuckerman

av Rabeea Assy
Inbunden Engelska, 2020-05-14
997
Köp
Spara som favorit
Finns även som
Visa alla 2 format & utgåvor
This collection in honour of Adrian Zuckerman, Emeritus Professor of Civil Procedure at the University of Oxford, brings together a distinguished group of judges and academics to reflect on the impact of his work on our understanding of civil procedure and evidence today.
Visa hela texten

Dr Rabeea Assy is an Assistant Professor at the University of Haifa Law Faculty and a regular speaker at the University of Oxford. In 2011 Dr Assy obtained his DPhil from the University of Oxford, where he was a Clarendon Scholar and a Modern Law Review grantee. His LLB and LLM (ranked 1st in class, summa cum laude) were completed at the University of Haifa. In 2010-2011 Dr Assy was the Editor and subsequently the Editor-in-Chief of the Oxford University Commonwealth Law Journal, and in 2009 a Visiting Researcher at the Hauser Global Scholars Programme at New York University Law School. Dr Assy is an expert in comparative civil procedure. His work on litigation in person has earned him a number of prestigious awards and grants, including very generous research grants from the EU Marie Curie Actions Programme and the German-Israeli Fund. His work in this area has also been published in a number of leading journals across the Commonwealth. Andrew Higgins is a lecturer in civil procedure at the University of Oxford. He teaches civil procedure on the BCL/MJur programme, and has taught tort and contract at New College and University College Oxford. He is currently General Editor of Civil Justice Quarterly and the academic member of the Civil Justice Council. Andrew is also a practicing barrister at the Victorian Bar, specialising in complex civil litigation and class actions.