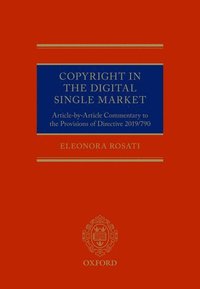 Copyright in the Digital Single Market

Article-by-Article Commentary to the Provisions of Directive 2019/790

av Eleonora Rosati
Inbunden Engelska, 2021-08-26
2228
Köp
Spara som favorit
Finns även som
Visa alla 1 format & utgåvor
This book provides an article-by-article commentary to all the provisions of Directive 2019/790 on copyright in the Digital Single Market. It is the first complete commentary to Directive 2019/790, analyzing the history, objectives, and content of each and every provision.
Visa hela texten

Sir Richard Arnold, Lord Justice of Appeal, Court of Appeal of England and Wales, Journal of Intellectual Property Law and Practice [Rosati] has established herself as one of the leading experts on EU copyright law [...] illustrated by the fact that, for the second time, Advocate General Szpunar has contributed a complimentary Foreword. As those familiar with her writings would expect, her commentaries are authoritative and insightful, grounded in her mastery of the existing acquis as well as the history and text of the legislation and academic commentary. The strengths of her exposition
are illustrated by the commentary to Article 17, probably the most controversial and difficult to interpret Article in the whole Directive, which is a tour de force running to 59 pages. Rosati not only sheds as much light as is humanly possible on the tortuous provisions of Article 17, but she also set out a
persuasive analysis of how it relates to the existing acquis .


First Advocate General Maciej Szpunar It is hard not to express satisfaction that, thanks to Professor Rosati's efforts, legal practitioners will have at their disposal an excellent tool to assist them in applying the DSM Directive. I also have no doubt that this Commentary will make a significant contribution to scientific research into problems pertaining to copyright protection in the digital era.

Eleonora Rosati is Professor of Intellectual Property Law and Director of the Institute for Intellectual Property and Market Law (IFIM) at Stockholm University. She is also Of Counsel at Bird & Bird, Editor of the Journal of Intellectual Property Law & Practice (OUP), long-standing contributor to The IPKat, and Co-Founder of Fashion Law London. Eleonora has published extensively in the IP field. She has also prepared technical briefings and studies and delivered talks at the request of international organizations and EU institutions and agencies (including WIPO, European Parliament, European Commission, and EUIPO), as well as international professional bodies and organizations (including ALAI, INTA, AIPPI, LIDC, and ECTA).