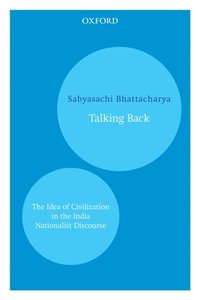 The Idea of Civilization in the India Nationalist Discourse

av Sabyasachi Bhattacharya
E-bok (EPUB - DRM), Engelska, 2011-08-24
251
Ladda ned
Spara som favorit
Laddas ned direkt
Läs i vår app för iPhone och iPad
British histories in the nineteenth century were by and large monologues. From the turn of the century Indians began to 'talk back', questioning colonial assumptions and narratives of India's past. What was the point of this endeavour? What was said when the Indians began to talk back? What was the discourse of civilization all about? Sabyasachi Bhattacharya explores these questions and lays bare the various forms this rhetoric took: from the defence of Indian civilization to a tendency towards vainglorious depiction of 'Hindu civilization'; from asserting civilizational unity in the distant past to creating a surrogate for nationhood. Tracing the inception of this discourse in the works of R.G. Bhandarkar and Bankimchandra Chatterjee, this book explores the evolution of the idea of civilization in the writings of luminaries like Gandhi, Tagore, Vivekananda, and Nehru, as well as works of intellectuals, historians, linguists, and sociologists like M.G. Ranade, V.K. Rajwade, D.D. Kosambi, Sardar K.M. Panikkar, Nirmal Kumar Bose, and many present-day scholars.
Visa hela texten