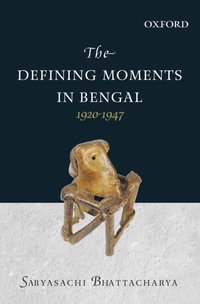 av Sabyasachi Bhattacharya
E-bok (EPUB - DRM), Engelska, 2014-05-27
669
Ladda ned
Spara som favorit
Laddas ned direkt
Läs i vår app för iPhone och iPad
This work explores some of the constitutive elements in the life and mind of Bengal in the twentieth century. The author addresses some frequently unasked questions about the history of modern Bengal. In what way was twentieth-century Bengal different from 'Renaissance' Bengal of the late-nineteenth century? How was a regional identity consciousness redefined? Did the lineaments of politics in Bengal differ from the pattern in the rest of India? What social experiences drove the Muslim community's identity perception? How did Bengal cope with such crises as the impact of World War II, the famine of 1943 and the communal clashes that climaxed with the Calcutta riots of 1946? The author has chosen a significant period in the history of the region and draws on a wealth of sources archival and published documents, mainstream dailies, a host of rare Bengali magazines, memoirs and the literature of the time to tell his story. Looking closely at the momentous changes taking place in the region's economy, politics and socio-cultural milieu in the historically transformative years 1920-47, this book highlights myriad issues that cast a shadow on the decades that followed, arguably till our times.
Visa hela texten