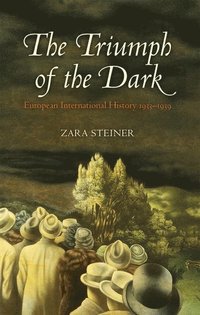 The Triumph of the Dark

Piers Brendon, The Independent A terrifically good read...a definitive account, the distillation of a lifetime's dedicated scholarship... No short review can do justice to the book's riches.


Richard Overy, Times Literary Supplement Magisterial...Anyone who works on the 1930s will be permanently in Steiner's debt...Zara Steiner's account of this troubled decade is fuller and richer than any yet published.


Jonathan Sumption, The Spectator One of those masterpieces of exact scholarship, conceived on a vast scale, which will remain the standard work on the subject for many years.


Britain and the World A landmark event...Steiner's two volumes will undoubtedly become a standard work of reference for the two decades between the world wars...magisterial...a triumph...a magnificent achievement... A distillation of a lifetime of fine scholarship, this is an invaluable account of one dimension of these complex and fateful years.


Patrick Porter, History Today A superbly wrought history and a major contribution to the field. It is a mammoth work filled to the brim with prodigious scholarship


Richard Overy, Wall Street Journal Definitive...the most thorough, wide-ranging and carefully argued narrative available on the tumultuous decade that ended in world war. Every historian of the period will stand in Steiner's debt.


Harold James, International Affairs Zara Steiner has written a beautifully crafted and persistently intelligent survey of Europes descent in the 1930s into war and barbarism.


American Historical Review ... an impressive history of a still controversial subject. It is a prodigious work, reflecting great industry and mastery of Western scholarship on the 1930s.


Keith Neilson, War In History a truly magnificent achievement ... a triumph of historical writing and an exemplar for all historians.

<br>Zara Steiner is Emeritus Fellow, New Hall, University of Cambridge, and a Fellow of the British Academy.<br>