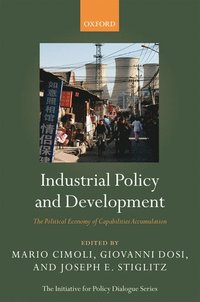 The Political Economy of Capabilities Accumulation

av Mario Cimoli
Häftad Engelska, 2009-09-24
636
Köp
Spara som favorit
Finns även som
Visa alla 1 format & utgåvor
This volume addresses the issue of state intervention in industry and markets. It provides a comprehensive critique of the policies informed by the Washington Consensus. Building on this critique, the editors bring together essays by leading experts in the field which focus on instances of successful industrial policies and interventions.
Visa hela texten

<br>M. Cimoli is Professor of Economics at the University of Venice (Ca' Foscari) since 1992 and Economic Affair Officer at ECLAC (Economic Commission for Latin America and the Caribbean) of UNITED NATIONS since 1999. He obtained a DPhil at the SPRU (University of Sussex) and he has held a number of visiting appointments in different universities and institutions (University of Pisa, University Metropolitan of Mexico (UAM), University of Campinas, etc). <br>Giovanni Dosi is Professor of Economics at the Scuola Superiore Sant'Anna in Pisa and Visiting Professor at the University of Manchester. His major research areas include economics of innovation and technological change, industrial organisation and industrial dynamics, theory of the firm and corporate governance, economic growth and development. Professor Dosi is Co-Director of the task forces on Industrial Policy and Intellectual Property Rights at the Initiative for Policy Dialogue, Columbia University, New York; Continental Europen Editor of Industrial and Corporate Change, Research consultant for Italian and international public and private institutions, and Honorary Research Professor at the University of Sussex. <br>Joseph E. Stiglitz was awarded the Nobel Prize in economics in 2001 and is University Professor at Columbia University where he founded the Initiative for Policy Dialogue in 2000. He was Chair of President Bill Clinton's Council of Economic Advisors from 1995-97 and Chief Economist and Senior Vice-President of the World Bank from 1997-2000. He is also chair of the University of Manchester's Brooks World Poverty Institute and is a member of the Pontifical Academy of Social Sciences. His best known recent publications include 'Making Globalization Work' (2006), 'Fair Trade for All' (2005), 'Globalization and its Discontents' (2002) and 'The Roaring Nineties' (2003).<br>

PREFACE; 1. The Political Economy of Capabilities Accumulation: The Past and Future of Policies for Industrial Development; GENERAL INTRODUCTION; 2. Institutions and Policies Shaping Industrial Development: An Introductory Note; 3. Technological Learning, Policy Regimes and Growth: The Long Term Patterns and Some Specificities of a 'Globalized' Economy; INDUSTRIAL POLICIES IN AN HISTORICAL PERSPECTIVE; 4. Emulation v. Comparative Advantage: Competing and Complementary Principles in the History of Economic Policy; 5. Industrial Policies in Developing Countries: History and Perspectives; 6. Industrial Tariffs, International Trade And Development; 7. The (Slow) Return of Industrial Policies in Latin America and the Caribbean; NATIONAL AND REGIONAL EXPERIENCES; 8. Flying Geese and Waddling Ducks: the Different Capabilities of East Asia and Latin America to <'Demand-Adapt>' and <'Supply-Upgrade>' their Export Productive Capacity; 9. Microeconomic Evolution in High Uncertainty Contexts: The Manufacturing Sector in Argentina; 10. The Impact of Public Policies in Brazil Along the Path from Semi-Stagnation to Growth in a Sino-Centric Market; 11. The Past, Present and Future of Industrial Policy in India: Adapting to the Changing Domestic and International Environment; 12. Growth and Development in China and India: The Role of Industrial and Innovation Policy in Rapid Catch-up; 13. The Political Economy of Industrial Policy in Asia and Latin America; 14. The Roles of Research at Universities and Public Labs in Economic Catch-up; 15. Nationality of Firm Ownership in Developing Countries: Who Should Crowd Out Whom in Imperfect Markets?; 16. A Question of Trust: Historical Lessons for Current Development; 17. Competition Policy and Industrial Development; 18. Latecomer Entrepreneurship: a Policy Perspective; 19. Intellectual Property and Industrial Development: A Critical Assessment; CONCLUSION; 20. The Future of Industrial Policies in the New Millennium: Toward a Knowledge-centered Development Agenda