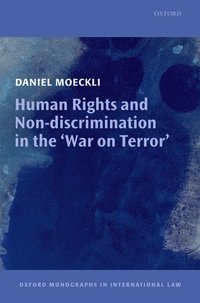 Human Rights and Non-discrimination in the 'War on Terror'

av Daniel Moeckli
Inbunden Engelska, 2008-01-01
1509
Köp
Spara som favorit
This book analyses the human rights impacts of anti-terrorism laws and practices post September 11th. It evaluates whether there are objective grounds for singling out people based on their nationality, national origin, 'race', or religion and argues that discriminatory anti-terrorism measures will fundamentally reshape these legal regimes.
Visa hela texten

Francesca Galli, The Cambridge Law Journal A reliable source of insightful information for students and advanced researchers in the field of international and human rights law. Further, it will be of interdisciplinary interest to international relations and politics scholars, as it explicitly addresses the international context of the anti-terrorism measures discussed.


Legal Studies, Vol.29, No.1 This is an important book written at a time when the creation of dualism between 'us', the ruling majority of the State authorities, and 'them', the minorities and/or non-nationals, has gained momentum and cultural conflicts are continually regressing the concept of the democratic state in a globalising society.


Ben Saul, The Modern Law Review 72 (3) 2009 [A] magnificent piece of scholarly research, and one which stands head and shoulders above the majority of books on terrorism since 9/11.


Helen Fenwick, Human Rights Law Review, 9, 2009 Human Rights and Non-Discrimination in the 'War on Terror' represents a worthy and thought-provoking exploration of the issue of direct discrimination in this context. It is likely to provoke further debate as to the human rights implications and genuinely non-discriminatory nature of the alternative it proposes-formal rules that are applicable to everyone...This book should be read by all those working in this field; it makes a very significant contribution
to the current deabte in drawing attention to the issue of direct discrimination which has been neglected in much of the writing on this subject.

Dr. Daniel Moeckli is an Oberassistent in Public Law at the University of Zurich and a Fellow of the University of Nottingham Human Rights Law Centre. His main research interests lie in the area of human rights law, both international and national. He is a member of the Panel of Experts advising the UN Special Rapporteur on the Promotion and Protection of Human Rights While Countering Terrorism. Previously, he acted as legal adviser to the International Bar Association's Task Force on International Terrorism, worked for Amnesty International and practised criminal law for several years.

1. Introduction: Security and Liberty in an Age of (Counter-)Terrorism; I CONCEPTS: ANTI-TERRORISM REGIMES AND NON-DISCRIMINATION; 2. Anti-terrorism Regimes: Rationale and Scope; 3. The Human Right to Non-Discrimination; II DISTINCTIONS BASED ON CITIZENSHIP STATUS; 4. Executive Detention of Foreign Terrorist Suspects; 5. Trial of Foreign Terrorist Suspects; III DISTINCTIONS BASED ON COUNTRY OF ORIGIN, OR NATIONALITY, RACE, OR RELIGION; 6. Selective Enforcement of Immigration Laws; 7. Selective Use of Police Powers; 8. Conclusion: The Wider Impacts of Discriminatory Anti-terrorism Measures; Bibliography