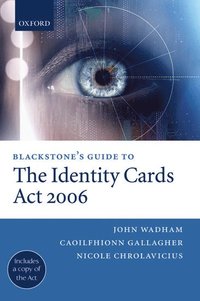 av John Wadham
Häftad Engelska, 2006-07-01
672
Köp
Spara som favorit
A concise, accessible Guide to the Identity Cards Act 2006, showing how it will fundamentally change the relationship between the state and the individual for all nationalities residing in the UK for more than three months. The Act will affect the operation of much existing legislation, including; the Data Protection Act 1998; the Police & Criminal Evidence Act 1984; the Regulation of Investigatory Powers Act 2000; the Race Relations Act 1976; and the Asylum and
Immigration (Treatment of Claimants) Act 2004.
Visa hela texten

<br>John Wadham has extensive experience in privacy, regulatory, administrative, human rights and civil liberties law. Since 2003 he has been Deputy Chair of the Independent Police Complaints Commission (IPCC), and prior to this he was Director of Liberty. In addition to his practical experience as a solicitor, John has co-authored a number of titles in the areas of public law, human rights, and civil liberties, including; Blackstone's Guide to the Freedom of Information Act 2000 (OUP, 2nd edn Jan 2005 with Jonathan Griffiths); Blackstone's Guide to the Human Rights Act 1998 (OUP, 3rd edn Oct. 2003 with Helen Mountfield and Anna Edmundson); and the civil liberties section of The Penguin Guide to the Law. Dr. Caoilfhionn Gallagher is a barrister with privacy and comparative public law expertise. She recently joined Doughty Street Chambers, having formerly worked as a policy lawyer at Liberty. She has written many academic articles, conference papers, and book chapters published by Ashgate, Butterworths Ireland, Lexis-Nexis and Elsevier, anc co-authored a number of artciles on ID Cards with Liberty's current Director, Shami Chakrabarti, in 2004 and 2005. Nicole Chrolavicius is a Canadian barrister and solicitor with expertise in human rights law. Having formerly worked as a general litigation barrister with a leading firm in Toronto and then a judicial assistant at the Supreme Court of Canada, Nicole is currently the Advice and Information Project Officer at Liberty with responsibility for providing human rights advice to members of the public.<br>