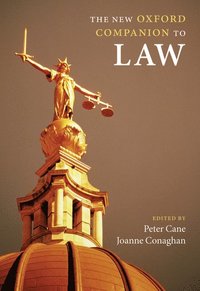 The New Oxford Companion to Law

av Peter Cane
Inbunden Engelska, 2008-09-18
950
Köp
Spara som favorit
For any reader needing a clear, concise explanation of a subject in law The New Oxford Companion to Law is the ideal reference work. Providing greater depth than legal dictionaries but always accessible to the non-expert, entries in the Companion cover all areas of law and legal systems and are extensively cross-referenced for ease of navigation.
Visa hela texten

Phillip Taylor Cane and Conaghan succeed in providing readers with a much better understanding of law and the legal system...the Companion blends the basics to indulge the occasional curiosity with useful suggestions for further reading paths which will not let you put this book down...


Phillip Taylor The book provides unrivalled encyclopaedic coverage of the fundamental major areas of law, from specific laws to crimes, cases, personalities, legal events, the role of law in national and international politics, and law's underlying philosophy...and all in one place!


Edinburgh Law Review Vol 13, 2009 The New Companion will...function as Oxford Companions should: as an introduction for the intelligent layman who can reach for it from his own shelves. To these readers, the New Companion is warmly commended.

<br>Peter Cane has been Professor of Law in the Research School of Social Sciences at the Australian National University since 1997. For 20 years before that, he taught law at Corpus Christi College, Oxford.<br> Joanne Conaghan studied law at Oxford. She is currently a Professor of Law at the University of Kent at Canterbury, having previously taught at the Universities of Exeter in Devon and San Diego in California. Her areas of research include labour law, tort, and feminist legal theory, and she has published widely in all three fields. She has been Managing Editor of the international journal, Feminist Legal Studies, since 1998. She is a member of the Co-ordinating Committee of the International Network on Transformative Employment and Labour Law (INTELL) and co-editor (with Michael Fischl and Karl Klare) of Labour Law in an Era of Globalization (OUP, 2002) and (with Kerry Rittich) of Labour Law, Work and Family (OUP, 2005).<br>