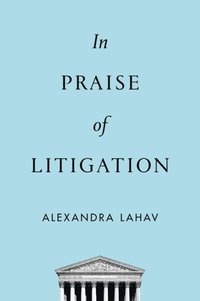 In Praise of Litigation E-bok

av Alexandra Lahav
E-bok (EPUB - DRM), Engelska, 2017-01-02
209
Ladda ned
Spara som favorit
Laddas ned direkt
Läs i vår app för iPhone och iPad
Finns även som
Visa alla 3 format & utgåvor
While the right to have one's day in court is a cherished feature of the American democratic system, alarms that the United States is hopelessly litigious and awash in frivolous claims have become so commonplace that they are now a fixture in the popular imagination. According to this view, litigation wastes precious resources, stifles innovation and productivity, and corrodes our social fabric and the national character. Calls for reform have sought, often successfully, to limit people's access to the court system, most often by imposing technical barriers to bringing suit. Alexandra Lahav's In Praise of Litigation provides a much needed corrective to this flawed perspective, reminding us of the irreplaceable role of litigation in a well-functioning democracy and debunking many of the myths that cloud our understanding of this role. For example, the vast majority of lawsuits in the United States are based on contract claims, the median value of lawsuits is on a downward trend, and, on a per capita basis, many fewer lawsuits are filed today than were filed in the 19th century. Exploring cases involving freedom of speech, foodborne illness, defective cars, business competition, and more, the book shows that despite its inevitable limitations, litigation empowers citizens to challenge the most powerful public and private interests and hold them accountable for their actions. Lawsuits change behavior, provide information to consumers and citizens, promote deliberation, and express society's views on equality and its most treasured values. In Praise of Litigation shows how our court system protects our liberties and enables civil society to flourish, and serves as a powerful reminder of why we need to protect people's ability to use it. The tort reform movement has had some real successes in limiting what can reach the courts, but there have been victims too. As Alexandra Lahav shows, it has become increasingly difficult for ordinary people to enforce their rights. In the grand scale of lawsuits, actually crazy or bogus lawsuits constitute a tiny minority; in fact, most anecdotes turn out to be misrepresentations of what actually happened. In In Praise of Litigation, Lahav argues that critics are blinded to the many benefits of lawsuits. The majority of lawsuits promote equality before the law, transparency, and accountability. Our ability to go to court is a sign of our strength as a society and enables us to both participate in and reinforce the rule of law. In addition, joining lawsuits gives citizens direct access to governmental officials-judges-who can hear their arguments about issues central to our democracy, including the proper extent of police power and the ability of all people to vote. It is at least arguable that lawsuits have helped spur major social changes in arenas like race relations and marriage rights, as well as made products safer and forced wrongdoers to answer for their conduct. In this defense, Lahav does not ignore the obvious drawbacks to litigiousness. It is expensive, stressful, and time consuming. Certainly, sensible reforms could make the system better. However, many of the proposals that have been adopted and are currently on the table seek only to solve problems that do not exist or to make it harder for citizens to defend their rights and to enforce the law. This is not the answer. In Praise of Litigation offers a level-headed and law-based assessment of the state of litigation in America as well as a number of practical steps that can be taken to ensure citizens have the right to defend themselves against wrongs while not odiously infringing on the rights of others.
Visa hela texten