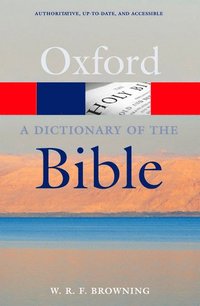 A Dictionary of the Bible

<br>W. R. F. Browning has been a Canon Residentiary of Blackburn Cathedral and of Christ Church Cathedral Oxford. He is now an honorary canon and an honorary priest in West Oxford. He was for thirteen years a lecturer in New Testament Studies at Cuddesdon College, Oxford, and at the Oxford University Department of Continuing Education. His books include Commentary on St Luke's Gospel (1960; 6th edition 1981), Meet the New Testament (1965), The Anglican Synthesis (1965), and Handbook of the Ministry (1985). In 2008 he was awarded the Cross of St Augustine of Canterbury for work in theological education.<br>

INTRODUCTION; ABBREVIATIONS; DICTIONARY; THE BOOKS OF THE BIBLE; APPENDICES; Measures, Weights, and Values; Important Dates in Biblical History; Select Bibliography; Web links; Maps; 1. Israel in Canaan: Joshua to Samuel and Saul; 2. The Near East in the time of the Assyrian Empire; 3. Palestine under the Herods; 4. The Background of the New Testament: Rome and the East (Jouneys of the Apostle Paul, Acts 15: 30 to 21: 15)