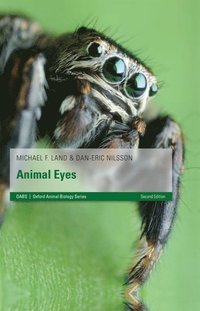 av Michael F Land
Häftad Engelska, 2012-03-01
664
Köp
Spara som favorit
Finns även som
Visa alla 3 format & utgåvor
This book covers the way that all known types of eyes work, from their optics to the behaviour they guide. The ways that eyes sample the world in space and time are considered, and the evolutionary origins of eyes are discussed. This new edition incorporates discoveries made since the first edition published in 2001.
Visa hela texten

Optics & Photonics News Animal Eyes is written in a vivid and clear style which will be understandable to both physicists and biologists. I highly recommend it to anyone, including amateurs, students and experienced researchers.

Michael F. Land obtained a BA in Zoology from Cambridge his PhD in Neurophysiology from University College London. He was Research Fellow at University of California, Berkeley (1967-1971), before moving to the University of Sussex where he was a Lecturer and then Professor of Neurobiology (from 1984 to present (now Emeritus)). He also held Visiting Fellowships in Eugene Oregon (1980), Australian Nation University Canberra (1982-84), and Duke University Marine Laboratory in Beaufort, NC (1993). He was elected to the Royal Society of London in 1982.

1. The origin of vision; 2. Light and vision; 3. What makes a good eye?; 4. Aquatic eyes: the evolution of the lens; 5. Lens eyes on land; 6. Mirrors in animals; 7. Apposition compound eyes; 8. Superposition eyes; 9. Movements of the eyes