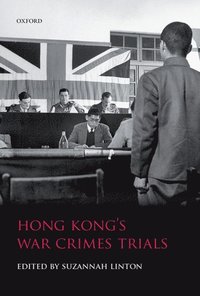 av Suzannah Linton
Inbunden Engelska, 2013-09-26
1179
Köp
Spara som favorit
Finns även som
Visa alla 2 format & utgåvor
Immediately after the Second World War 46 trials were held by the British military in Hong Kong in which 123 defendants, mainly from Japan, were tried for war crimes. This book is the first to analyze these trials, situating them within their historical context and showing their importance for the development of international criminal law.
Visa hela texten

Guo Cai, Journal of International Criminal Justice From a young Chinese lawyer's perspective, the book... represents a gift from the elder generation of international law scholars who demonstrated meticulous archival research, fine interdisciplinary methodology and lawyers' responsibility in the midst of highly emotional and politically driven debates... The publication of Hong Kongs War Crimes Trials marks not the end, but the beginning of a larger, ongoing process for subsequent academics and
practitioners alike.


Frederic Borch III, Military Law Review Hong Kong's War Crimes Trials looks at British war crimes prosecutions in its south China colony from 1946 to 1948, and is an important and unique contribution to the history of war crimes trials. This is an important book by outstanding scholars, and it deserves to reach a wide audience. Specialists in military history, law, and international affairs will want to read this fine book, which will also appeal to the general reader.


Colin Day, Journal of the Royal Asiatic Society Hong Kong Branch A major contribution to our knowledge of these events.


Gregory S Gordon, Melbourne Journal of International Law Edited by Professor Suzannah Linton, Hong Kong's War Crimes Trials makes an outstanding contribution... We should not be surprised then if a new cohort of ICL historians, inspired by the superior scholarship and doctrinal insights of Hong Kong's War Crimes Trials, soon sets sail in those unchartered archival waters... Hong Kong's War Crimes Trials does an exemplary job of elucidating the history, context and law related to Britain's 1946-48
prosecutions of suspected Japanese war criminals in its south China coast colony. The structure and content of the book lend themselves to a well-organised and comprehensive analysis of the proceedings.


David Blake Knox, Dublin Review of Books The military courts working in Hong Kong between 1946 and 1948 sent out a message to the world that the rule of law should be based on reason and justice - and not on military force. That is why this collection of essays, examining the legal framework of those trials, remains of contemporary relevance. As Suzannah Linton observes, this is not just a question of compelling Japan to address the crimes that its army committed within living memory throughout Asia. It
remains a critical issue because the punishment of war crimes is of continuing importance to the human race.


Georgina Fitzpatrick, Michigan War Studies Review These authors' insights reflect their different disciplines and professional experiences. Although the assembled essays are meant chiefly for readers with an interest in international criminal law and procedure, historians of the aftermath of the Second World War will find that they throw light on a neglected area of their subject ... the book's thematic approach to studying the Hong Kong trials ensures that it will be of great interest to both historians and legal
...