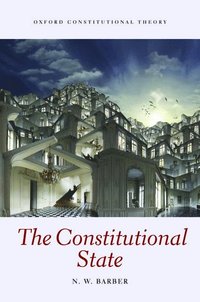 av N W Barber
Häftad Engelska, 2012-09-27
553
Köp
Spara som favorit
Finns även som
Visa alla 3 format & utgåvor
An original account of the nature of the state and its constitution, casting light on some of the central puzzles faced by writers on constitutions. Amongst the issues considered are the possibility of states to undertake actions and form intentions, and the moral significance of these actions for the state's citizens.
Visa hela texten

Joseph Weiler, Editor-in-Chief of the European Journal of International Law What Barber does so successfully and so importantly and so refreshingly is to focus, first and foremost, on society, on the social, on sociality - on the human context in which and on which constitutionalism takes it grip It presents as a result a much more interesting interplay between is and ought in thinking of constitutionalism and the state.


Maris Kpcke Tintur, The American Journal of Jurisprudence In his thought-provoking The Constitutional State, Nick Barber sets out to explain a social and political reality by attending to the reasons which call for its existence, and to show how some core defining features of that reality render it capable of responding to those reasons...it is a knowledgeable, wide-ranging and inspiring contribution, in particular thanks to a skillful and effective use of examples that help translate abstract points into real-life concerns
without loss in argumentative power.


Bradley Miller, Constitutional Commentary The Constitutional State is unfailingly intelligent and provocative, and should be welcomed by students of constitutional theory, constitutional law, political science, and legal philosophy...The book's breadth and interdisciplinarity leads to many unexpected discoveries.

<br>Nick Barber is the Senior Law Fellow at Trinity College. He specializes in public law, in particular constitutional theory and has lectured on constitutional issues in America, Canada, Spain, and Germany.<br>