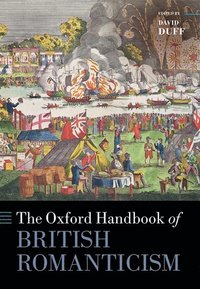 The Oxford Handbook of British Romanticism

av David Duff
Inbunden Engelska, 2018-10-03
1757
Köp
Spara som favorit
Finns även som
Visa alla 3 format & utgåvor
This Handbook provides a comprehensive overview of British Romantic literature and an authoritative guide to all aspects of the movement including its historical, cultural, and intellectual contexts, and its connections with the literature and thought of other countries. All the major Romantic writers are covered alongside lesser known writers.
Visa hela texten

David Duff is Professor of Romanticism at Queen Mary University of London and founder-director of the London-Paris Romanticism Seminar. He is the author of Romance and Revolution: Shelley and the Politics of a Genre (1994) and Romanticism and the Uses of Genre (OUP, 2009), which won the ESSE Book Award for Literatures in the English Language. His edited books include Modern Genre Theory (2000), Scotland, Ireland, and the Romantic Aesthetic (2007, with Catherine Jones), and the forthcoming Oxford Anthology of Romanticism. He is currently researching the literary history of the prospectus.