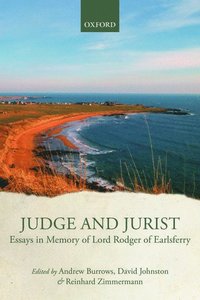 Essays in Memory of Lord Rodger of Earlsferry

av Andrew Burrows
Inbunden Engelska, 2013-06-20
2586
Köp
Spara som favorit
Finns även som
Visa alla 2 format & utgåvor
Collecting together 47 essays from colleagues and friends of Lord Rodger of Earlsferry, this book commemorates his work and contribution to law and legal scholarship, including his role as a judge of the UK Supreme Court and his interests in Roman law, Scots law, and legal history.
Visa hela texten

Sheriff T Welsh QC, SCOLAG Legal Journal The essays are rich with history, rewarding the reader with a wealth of knowledge and hopefully with a crisper understanding of some of the generalities and nuances of Roman Law... The editors, authors and publishers, at Oxford University Press, are to be commended on the compilation of such a fitting and inspiring tribute to a man whose immense contributions to the development of the very fabric of our legal system will, undoubtedly, outlast us all.


The Commonwealth Lawyer 'Of Lord Rodger's brilliant mind and his scintillating work none of the contributors is in any doubt, A thoughtful bibliography attached to this volume records 107 learned articles by the judge which speaks volumes for his erudition. His forthright style, clarity of expression, and eschewal of trendy theories mark him out as truely remarkable. This volume will be savoured by "lawyers and none lawyers who find interest and enjoyment in reading about the law", as one
of the contributors neatly puts it.


David Pannick, QC, The Times This volume records the achievements and captures the spirit of a distinguished judge and academic lawyer who so enjoyed life ... Lord Dyson, now Master of the Rolls, recalls that "it was fun to be in his company. His laugh was more in the nature of a roar; it could be heard from quite some distance. I can still hear it reverberating down the corridor." It can be heard on opening this book.


Sheriff Frank C Crowe, Journal of the Law Society of Scotland ...It rewards the reader with a wealth of knowledge, anecdote and affection for one of the greatest legal figures of our times.


J D Ford, The Edinburgh Law Review The truly extraordinary thing about Lord Rodger of Earlsferry is that he not only delivered judgements of the highest calibre but also wrote books and articles that any university professor would be proud to publish.