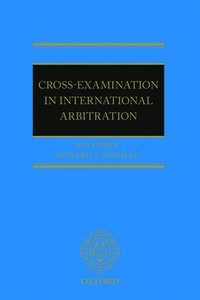 av Kaj I Hobr
Häftad Engelska, 2014-12-04
769
Köp
Spara som favorit
A practical, self-teaching guide to effective cross-examination in international arbitration. Offers an introductory or quick-reference guide to essential cross-examination techniques and how they can best be best adapted to the arbitral format.
Visa hela texten

Kaj I Hober, Partner, Mannheimer Swartling in Stockholm and Professor of East European Commercial Law at Uppsala University, Howard S. Sussman, Of Counsel, Wrobel Schatz & Fox LLP, New York (and previously Associate Professor of Law at University of Houston) Kaj I. Hober is a Partner at Mannheimer Swartling in Stockholm and a Professor of International Investment and Trade Law at Uppsala University. He has acted as arbitrator in more than 150 international arbitrations and as counsel in a comparable number. He was involved in preparing the 1999 Swedish Arbitration Act and in drafting the Arbitration Rules of the Swedish Chamber of Commerce. He sits on the board of the Arbitration Institute of the Stockholm Chamber of Commerce. He has published numerous books and articles in the field of arbitration. Howard S. Sussman is of Counsel at Wrobel Schatz & Fox LLP, New York. He is a highly-experienced trial and appellate litigator, having practiced for almost fifty years in civil litigation, arbitration, and white-collar criminal prosecution and defence. From 1977-1982 he was Associate Professor of Law at the University of Houston, Texas, before founding Sussman Sollis Tweedy & Wood LLP, New York. He is now a prominent consultant on domestic and international business disputes and related issues and is the 'Elder Statesman' at Wrobel Schatz & Fox LLP.

BACKGROUND ; 1. The fundamentals of cross examination ; 2. Why cross-examination in international arbitration is Different ; TEN DO'S AND DON'T'S ; 1. Be fully prepared ; 2. Be brief ; 3. Use only 'leading questions' ; 4. Use only short, simple, unambiguous questions ; 5. Proceed by small factual steps ; 6. Listen to the answer ; 7. Do not ask for conclusions; save for closing argument ; 8. Do not let the witness repeat the direct testimony ; 9. Do not let the witness explain ; 10. Do not argue or get angry ; CONCLUDING REMARKS