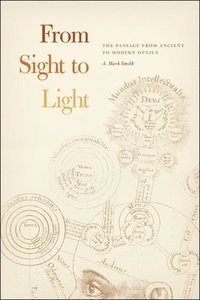 From Sight to Light - The Passage from Ancient to Modern Optics

av A Mark Smith
Häftad Engelska, 2017-12-22
391
Köp
Spara som favorit
From its inception in Greek antiquity, the science of optics was aimed primarily at explaining sight and accounting for why things look as they do. By the end of the seventeenth century, however, the analytic focus of optics had shifted to light: its fundamental properties and such physical behaviors as reflection, refraction, and diffraction. This dramatic shift which A. Mark Smith characterizes as the Keplerian turn" lies at the heart of this fascinating and pioneering study. Breaking from previous scholarship that sees Johannes Kepler as the culmination of a long-evolving optical tradition that traced back to Greek antiquity via the Muslim Middle Ages, Smith presents Kepler instead as marking a rupture with this tradition, arguing that his theory of retinal imaging, which was published in 1604, was instrumental in prompting the turn from sight to light. Kepler's new theory of sight, Smith reveals, thus takes on true historical significance: by treating the eye as a mere light-focusing device rather than an image-producing instrument as traditionally understood Kepler's account of retinal imaging helped spur the shift in analytic focus that eventually led to modern optics. A sweeping survey, From Sight to Light is poised to become the standard reference for historians of optics as well as those interested more broadly in the history of science, the history of art, and cultural and intellectual history."
Visa hela texten

"In what will surely become a canonical work, Smith surveys the development of optics in the Western world from classical Greece through Johannes Kepler. . . . Smith systematically guides readers through all major texts in the history of optics, at times in painstaking detail, making this book a valuable reference work. At the same time, he never lets the big picture recede into the background for too long, consistently and clearly articulating the larger textual traditions and conceptual innovations in his sources and weaving them into a coherent, engaging story and historical argument. Students and faculty alike--in fact, anyone interested in the nature and development of premodern optics--will need to consult this book. Essential."--Christopher Dainty "CHOICE" "A magisterial history of optics over the course of two millennia. . . . This is a must-read for anyone interested in the history of sight, vision, light, and the study thereof."--Carla Nappi "New Books in Science, Technology, and Society" "Absolutely delightful to read, with an elegance far exceeding that of the overwhelming majority of scientific papers. The book holds one's attention and is difficult to put down."--Christopher Dainty "Science" "The self-proclaimed aim of Mark Smith's From Sight to Light is to suggest a new historical narrative to replace the late David C. Lindberg's paradigmatic account of the history of pre-modern optics in Theories of Vision from Al-Kindi to Kepler. Just as Kepler wrote a paralipomena (a supplement) to the epitome of the theory of perspectiva by the medieval mathematician Witelo, Smith suggests this book as a paralipomena to Lindberg's account. The immediate additions to Lindberg's grand narrative include a more extensive description of premedieval theories of optics and a detailed analysis of their technical and geometrical aspects, especially those concerned with questions of reflection and refraction. Smith accomplishes this with great clarity, confidently guiding the reader through the intricacies of Euclid, Ptolemy, Alhacen, and Kepler."--Carla Nappi "Journal for the History of Astronomy" "Over the course of his career, A. Mark Smith has written on the entire history of geometrical optics, from antiquity to the seventeenth century. There is now hardly a single area in this field that has not been transformed by Smith's careful and lucid explanations of these mathematical theories . . . . As he has done in all his previous work, Smith leads the reader confidently through the history of the science, and through the details of many mathematical proofs. . . . In providing the first comprehensive and mathematically sophisticated account of premodern optics, From Sight to Light will engage and enlighten scholars of the history of ancient, medieval, and early modern optics."--Carla Nappi "Renaissance Quarterly" "No one doubts Kepler's contribution to optics and vision. But here, as never before, his ancient and medieval debts are set in deeper historical context, and importantly, his dramatic departures are carefully reassessed and critically revised. Smith's fresh interpretation of the Western optical tradition--impressive in scope and rigor, and written with remarkable clarity--will likely become a classic." --Robert Alan Hatch, University of Florida "Renaissance Quarterly" "In its text-based approach, From Sight to Light offers a convincing conceptual history of optics. Well argued and based on a lifetime of close study of the primary sources, it deserves to be widely read. From Sight to Light has the potential to be a classic alongside David Lindberg's Theories of Vision."--Sven Dupre, Max Planck Institute for the History of Science "Renaissance Quarterly" "From Sight to Light is an exciting and valuable addition to the diachronic history of science in an area of crucial importance not

A. Mark Smith is a Curators' Professor of History at the University of Missouri-Columbia. Among his numerous publications is an eight-volume critical Latin edition and English translation of Alhacen's De aspectibus.