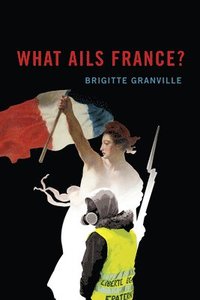 av Brigitte Granville
Inbunden Engelska, 2021-04-01
307
Köp
Spara som favorit
As evidenced by the yellow vests protest movement that began in France in 2018, the state of the French nation inspires gloom among many of its citizens. Brigitte Granville views this malaise as a peculiarly French symptom of the difficulties experienced by many advanced industrial democracies in the face of globalization, technology, and mass immigration. Granville brings trenchant criticism to bear in this wide-ranging survey of the political economy of contemporary France, building her case for the prosecution on the self-reinforcing rigidity produced by a narrow Parisian oligarchy that is both entitled and intellectually hidebound. What Ails France? applies an economist's vision to the monetary and fiscal pathologies flowing from this ideologically motivated technocratic rule, reflected in Europe's flawed monetary union, runaway indebtedness, and chronically high structural unemployment. The author marshals academic research from a wide range of disciplines to fuel a provocative and at times contentious analysis, proposing various treatments for French ailments that would reinvigorate the republican value of liberte with a new local slant. A refreshing, ideologically freewheeling discussion, What Ails France? provides a positive take on the innovations of our digital age, exploring their potential to bring about a more representative democracy and a fairer society.
Visa hela texten

"This is a richly researched, elegantly written book in a liberal intellectual frame. [Granville's} description of the French elite and its motives ... helps to explain the animus many French people hold towards their president whose political future is hanging in the balance because of it." Ben Hall, Financial Times "Provoked by the mass protests of the gilets jaunes in 2018, Brigitte Granville has written a superbly crafted, well-researched indictment of the arrogance and hubris of the monarchical French state, currently embodied in Emmanuel Macron, and itself embedded in the yet remoter autocracy of a European empire. A passionate call for the recovery of political and economic freedom, Granville's book is an essential corrective to the one-sided view that it was unmitigated folly for Britain to leave the European Union." Robert Skidelsky, biographer of John Maynard Keynes and author of What's Wrong with Economics? A Primer for the Perplexed "This is ostensibly a book about the pathologies of modern France: not only its over-mighty, unelected technocrats - the 6,000 enarques who really rule the country - but also the oligarchical structures of business and the media, the Eurocrats whose grand design of a single currency has been an unacknowledged economic failure, and even the mercurial young president whose election in 2017 seemed to promise real change. As Granville explains, Emmanuel Macron in fact personifies the disease of which he purports to be the cure, offering voters only the semblance of change in order that things remain the same. Yet the reader quickly realizes that Granville's diagnosis applies far beyond the borders of France. Infused with the liberal spirit of Bastiat, Tocqueville, and Aron, What Ails France? is a microcosmographia of what ails the Western world as whole." Niall Ferguson, the Hoover Institution, Stanford "There are three reasons why French voters are increasingly disinclined to vote outside presidential elections. Many voters were convinced Macron would bring a breath of fresh air to French politics and genuinely seek reforms: these hopes have been betrayed. The second is that regional presidents have no power as France remains as centralised as it ever was. A third reason is explained in forensic detail by Brigitte Granville in What Ails France?. Macron - who quickly earned the nickname Jupiter among Paris insiders after his victory in 2017, has proved to be a great centraliser." Opinion CIDOB

Brigitte Granville is professor of international economics and economic policy at Queen Mary University of London.