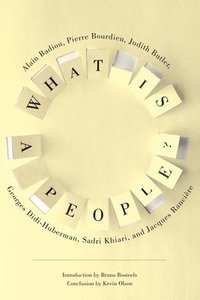 What Is a People?

av Alain Badiou, Judith Butler, Georges Didi-Huberman, Sadri Khiari, Jacques Ranciere
Inbunden Engelska, 2016-05-03
245
Köp
Spara som favorit
Finns även som
Visa alla 1 format & utgåvor
What Is a People? seeks to reclaim "people" as an effective political concept by revisiting its uses and abuses over time. Alain Badiou surveys the idea of a people as a productive force of solidarity and emancipation and as a negative tool of categorization and suppression. Pierre Bourdieu follows with a sociolinguistic analysis of "popular" and its transformation of democracy, beliefs, songs, and even soups into phenomena with outsized importance. Judith Butler calls out those who use freedom of assembly to create an exclusionary "we," while Georges Didi-Huberman addresses the problem of summing up a people with totalizing narratives. Sadri Khiari applies an activist's perspective to the racial hierarchies inherent in ethnic and national categories, and Jacques Ranciere comments on the futility of isolating theories of populism when, as these thinkers have shown, the idea of a "people" is too diffuse to support them. By engaging this topic linguistically, ethnically, culturally, and ontologically, the voices in this volume help separate "people" from its fraught associations to pursue more vital formulations. Together with Democracy in What State?, in which Giorgio Agamben, Alain Badiou, Daniel Bensaid, Wendy Brown, Jean-Luc Nancy, Jacques Ranciere, Kristin Ross, and Slavoj Zizek discuss the nature and purpose of democracy today, What Is a People? expands an essential exploration of political action and being in our time.
Visa hela texten

This exciting and provocative collection of essays reflects on the exclusionary perils and emancipatory potentialities of the concept of 'people' and its myriad cognates: popular, peoples, populism, and so forth. With contributions from leading philosophers and social theorists from France, Tunisia, and the United States, What is a People? is a must-read for anyone interested in cutting-edge work in the tradition of French and Francophone critical theory. -- Amy Allen, Pennsylvania State University, author of The Politics of Our Selves: Power, Autonomy, and Gender in Contemporary Critical Theory The central ambition of this powerful book is to leverage the term 'people' away from its conservative recuperations to maintain it in the lexical war chest of the politics of emancipation. All of the authors address, in this regard, the same central issue of the problematic status of this category, though their perspectives and approaches diverge significantly, ranging from linguistic and conceptual analysis to a concern with implicit racial and nationalist politics. The book as a whole therefore makes a significant contribution to the critical debate on the category of the people in all of its conceptual extensions: popular sovereignty, populism, popularity, and ambiguous expressions like 'we the people.' -- Gabriel Rockhill, Villanova University, author of Radical History and the Politics of Art A critical arsenal with which to think the tensions embedded in popular politics Marx & Philosophy

Alain Badiou (PhD, Philosophy, Ecole Normale Superieure) holds the Rene Descartes Chair at the European Graduate School; he also teaches at the Ecole Normale Superieure and the College International de Philosophie in Paris. He is the author of several successful novels and plays as well as more than a dozen philosophical works, including his masterwork, Being and Event (Continuum, 2007), and several Columbia titles, includng Plato's Republic (2013) and Jacques Lacan Past and Present (2016).

Preface Introduction: This People Which Is Not One, by Bruno Bosteels 1. Twenty-Four Notes on the Uses of the Word "People", by Alain Badiou 2. You Said "Popular"?, by Pierre Bourdieu 3. "We, the People": Thoughts on Freedom of Assembly, by Judith Butler 4. To Render Sensible, by Georges Didi-Huberman 5. The People and the Third People, by Sadri Khiari 6. The Populism That Is Not to Be Found, by Jacques Ranciere Conclusion: Fragile Collectivities, Imagined Sovereignties, by Kevin Olson Notes Index