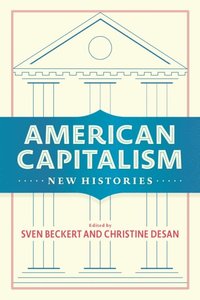 av Sven Beckert, Christine Desan
E-bok (EPUB - DRM), Engelska, 2018-02-06
319
Ladda ned
Spara som favorit
Laddas ned direkt
Läs i vår app för iPhone, iPad och Android
Finns även som
Visa alla 2 format & utgåvor
The United States has long epitomized capitalism. From its enterprising shopkeepers, wildcat banks, violent slave plantations, huge industrial working class, and raucous commodities trade to its world-spanning multinationals, its massive factories, and the centripetal power of New York in the world of finance, America has come to symbolize capitalism for two centuries and more. But an understanding of the history of American capitalism is as elusive as it is urgent. What does it mean to make capitalism a subject of historical inquiry? What is its potential across multiple disciplines, alongside different methodologies, and in a range of geographic and chronological settings? And how does a focus on capitalism change our understanding of American history?American Capitalism presents a sampling of cutting-edge research from prominent scholars. These broad-minded and rigorous essays venture new angles on finance, debt, and credit; women's rights; slavery and political economy; the racialization of capitalism; labor beyond industrial wage workers; and the production of knowledge, including the idea of the economy, among other topics. Together, the essays suggest emerging themes in the field: a fascination with capitalism as it is made by political authority, how it is claimed and contested by participants, how it spreads across the globe, and how it can be reconceptualized without being universalized. A major statement for a wide-open field, this book demonstrates the breadth and scope of the work that the history of capitalism can provoke.
Visa hela texten