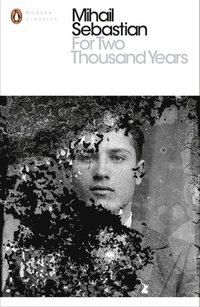 av Mihail Sebastian
(1 röst)
Häftad Engelska, 2016-02-25
113
Köp
Spara som favorit
Finns även som
Visa alla 1 format & utgåvor
'Nothing I have read is more affecting than Mihail Sebastian's magnificent, haunting 1934 novel, For Two Thousand Years' - Philippe Sands, Guardian Books of the Year A prescient interwar masterpiece, available in English for the first time 'Absolutely, definitively alone', a young Jewish student in Romania tries to make sense of a world that has decided he doesn't belong. Spending his days walking the streets and his nights drinking and gambling, meeting revolutionaries, zealots, lovers and libertines, he adjusts his eyes to the darkness that falls over Europe, and threatens to destroy him. Mihail Sebastian's 1934 novel was written amid the anti-Semitism which would, by the end of the decade, force him out of his career and turn his friends and colleagues against him. For Two Thousand Years is a lucid, heart-wrenching chronicle of resilience and despair, broken layers of memory and the terrible forces of history.
Visa hela texten

At a dark moment of identity politics and resurgent nationalism, the books that have left the deepest impression have been those that offer a sense of what we might learn from times past. Nothing I have read is more affecting than Mihail Sebastian's magnificent, haunting 1934 novel, For Two Thousand Years (trans Philip O Ceallaigh), now available in English -- Philippe Sands * Guardian Books of the Year * Remarkably pertinent to our time and place. . . What's chilling about For Two Thousand Years, in this sensitive translation by Philip O Ceallaigh, is how its oppressive atmosphere foreshadows the rise of Romanian authoritarianism and the destruction of Romanian Jewry, even though it was published before the fascists came to power. . . I can't help thinking that Mihail Sebastian is sending us a message across the generations * New York Times Review of Books * The best novel of the year was written in 1934. Mihail Sebastian's For Two Thousand Years, an account of interwar Bucharest by a nameless Jewish student, took a human lifespan to find an English translation -- Janan Ganesh * Financial Times * It wonderfully captures the sense of pre-war Romania in all its sophistication, its beauty and its horror... I love Sebastian's courage, his lightness and his wit -- John Banville * Open Book, Radio 4 * An elegant and candid and horrifyingly understated account of watching violent unreason rise around you -- Ben Lerner * Paris Review * Mordant, meditative, knotty, provocative... More than a fascinating historical document, it is a coherent and persuasive novel... Penguin should be applauded for finally bringing this book to an anglophone audience. Philip O Ceallaigh's translation is highly convincing and sweeps us along with its protagonist's emotional shifts -- Toby Lichtig * Financial Times * Eerily prophetic... a brilliant translation of a most unusual novel. For Two Thousand Years is a book of truths -- Eileen Battersby * Irish Times * One of the most unusual, seductive and beautiful books I've read in years. It has lightness of touch coupled with astonishing range... Like any classic of a type we've not seen before, it is a book which needs to be read and re-read and which, over years, will become a reliable friend for life -- John Self * Jewish Quarterly * For Two Thousand Years is lucid, melancholy and playful - a fictional memoir recreating the night-life and love affairs, friendships and betrayals of a world that was falling apart -- John Gray, author of The Soul of the Marionette Philip O Ceallaigh's meticulous and vibrant translation restores to us the wry, bitterly intelligent, endlessly self-castigating yet dauntingly perceptive and prophetic voice of Mihail Sebastian. For Two Thousand Years is a masterful book charged with the tension and paranoia that preceded one of the bloodiest convulsions in the history of the 20th century, and the terrifying thing is, it could have been written yesterday, today, tomorrow -- Colin Barrett, author of Young Skins A powerful and prescient novel which throws light on darkness and disturbs as it entrances... If there is any justice [Sebastian's] posthumous profile will increase -- Malcolm Forbes * Herald Scotland * Complex, unsettling... Sebastian seldom provoked indifference in his readers. That is why he belongs in the pantheon of classic authors... For Two Thousand Years is a work that also speaks to our own discontents right now -- Gavin Jacobson * New Statesman * His prose is like something Chekhov might have written - the same modesty, candour, and subtleness of observation -- Arthur Miller Restraint is the defining mark of both For Two Thousand Years and the subsequent Journal, as it is of Sebastian's personality... In a truly atrocious time he refused to compromise on his duties as a civilized human being... Even on the darkest pages he finds room for a graceful turn of phrase, a flash of wit, a gesture of understanding and forgiveness -- John Banville * New York Review of Boo

Mihail Sebastian was born in Romania in 1907 as Iosef Hecter. He worked as a lawyer and writer until anti-Semitic legislation forced him to abandon his public career. Having survived the war and the Holocaust, he was killed in a road accident early in 1945 as he was crossing the street to teach his first class. His long-lost diary, Journal 1935-1944: The Fascist Years, was published to great acclaim in the late 1990s.