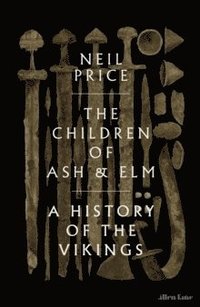 The Children of Ash and Elm

A History of the Vikings

av Neil Price
(2 röster)  |  Läs 1 recension
Inbunden Engelska, 2020-08-25
309
Köp
Spara som favorit
Finns även som
Visa alla 3 format & utgåvor
A TIMES BOOK OF THE YEAR 2020 'As brilliant a history of the Vikings as one could possibly hope to read' Tom Holland The 'Viking Age' is traditionally held to begin in June 793 when Scandinavian raiders attacked the monastery of Lindisfarne in Northumbria, and to end in September 1066, when King Harald Hardrada of Norway died leading the charge against the English line at the Battle of Stamford Bridge. This book, the most wide-ranging and comprehensive assessment of the current state of our knowledge, takes a refreshingly different view. It shows that the Viking expansion began generations before the Lindisfarne raid, and traces Scandinavian history back centuries further to see how these people came to be who they were. The narrative ranges across the whole of the Viking diaspora, from Vinland on the eastern American seaboard to Constantinople and Uzbekistan, with contacts as far away as China. Based on the latest archaeology, it explores the complex origins of the Viking phenomenon and traces the seismic shifts in Scandinavian society that resulted from an economy geared to maritime war. Some of its most striking discoveries include the central role of slavery in Viking life and trade, and the previously unsuspected pirate communities and family migrations that were part of the Viking 'armies' - not least in England. Especially, Neil Price takes us inside the Norse mind and spirit-world, and across their borders of identity and gender, to reveal startlingly different Vikings to the barbarian marauders of stereotype. He cuts through centuries of received wisdom to try to see the Vikings as they saw themselves - descendants of the first human couple, the Children of Ash and Elm. Healso reminds us of the simultaneous familiarity and strangeness of the past, of how much we cannot know, alongside the discoveries that change the landscape of our understanding. This is an eye-opening and surprisingly moving book.
Visa hela texten

Everybody thinks they know the Vikings, but Neil Price's magical book casts them in an entirely new light ... Scholarly, colourful and often remarkably funny, this is history at its very best, a richly decorated window on to a very strange world. -- Dominic Sandbrook and Gerard De Groot * The Times Books of the Year * as Neil Price shows in his colourful, revelatory new book, we are almost always looking at the Vikings the wrong way around. Price is one of the world's foremost experts on the Vikings and holds the chair of archaeology at Uppsala University ... He may know more about medieval Scandinavia than anyone else alive, and he aims to show us these fascinating people as they saw themselves, not as they were perceived by those on the sharp end of their robbery ... Thousands of books have been published about the Vikings - this is one of the very best. -- Dan Jones * Sunday Times * This history takes us deep into the lives - and deaths - of the Vikings ... What surprised me about The Children of Ash and Elm is the extent to which recent archaeological discovery is transforming our picture of the Vikings from the inside. Price, who has spent several decades in ancient cesspits and the remains of Norse workshops, is superbly qualified to understand the significance of what is being unearthed, analysed and dated, and conveys a sense of excitement about just how much is being learnt -- David Aaronovitch * The Times * a book that offers delight after delight ... lyrical, unnerving, specific, and passionately uncertain, all at once ... Throughout this book are glorious collections of Viking facts that are technically known yet still resist our best attempts at interpretation ... Price has a talent for evoking the Vikings' physical surroundings as they might have been - a gift for recreation that's probably natural for an archaeologist accustomed to eking significance from the smallest bit of disturbed dirt ... To convey such a deep sense of scholarly indeterminacy, all while dazzling the reader with cinematic detail-this is, truly, a feat. -- Rebecca Onion * Slate Magazine * a thrilling read ... His clear, engaging style introduces us to the Scandinavian communities of the eighth and ninth centuries, centered around the farmstead, before catapulting us overseas and outward into an expanding world where raiding and trading quickly boosted the wealth of individuals and the ambitions of the elites. ... The stereotype of the Viking that we know from history books and popular media is here dismantled and presented anew by Mr. Price in all its wonderful, terrifying complexity and ambiguity. -- Karin Altenberg * Wall Street Journal * This is a comprehensive, lyrically told and personal account of the Viking Age, the product of more than thirty years of experience as a leading archaeologist and researcher. Many books assess the "Viking achievement". The Children of Ash and Elm examines instead who the Vikings were, how they saw themselves and why they did what they did ... no other history of the Vikings is as vibrant or expands the scope of the Viking world to encompass not just landscapes, but mindscapes. -- Jane Kershaw * Times Literary Supplement * a very human history of the period, one that is by turns illuminating, surprising and even moving ... much of the beauty of Price work is in its qualitative, sometimes subjective nature, even while it remains a meticulously researched, rigorous piece of scholarship. -- Eleanor Barraclough * Literary Review * The question that this dark, brilliantly written and absorbing book asks is: who were these people and where did this violence come from?...The powerful and unsettling message of this book is that they never went home. These strange, vicious people are our forebears. They never went home. -- Jay Elwes * Spectator * It is full of meticulous accounts of the specifics of early medieval Scandinavian daily life ... beautifully evocative, engaging and thought-provoking ... It is i

Neil Price holds the Chair of Archaeology at Uppsala University, Sweden, where he has also been appointed Distinguished Professor by the Swedish Research Council. A leading expert on the Viking Age, his fieldwork, teaching and research have taken him to more than forty countries. Neil is a Fellow of learned academies in Britain and Scandinavia, including Sweden's oldest, the Royal Society of Sciences; in 2017 it awarded him the Thureus Prize for his lifetime achievements in Viking studies. His publications have appeared in sixteen languages, and he is a frequent consultant and contributor to television and film.