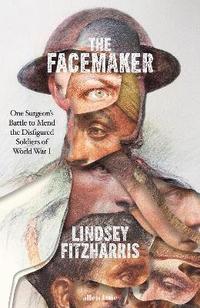 av Lindsey Fitzharris
Inbunden Engelska, 2022-06-07
208
Köp
Spara som favorit
THE INTERNATIONAL BESTSELLER The poignant story of the visionary surgeon who rebuilt the faces of the First World War's injured heroes, and in the process ushered in the modern era of plastic surgery From the moment the first machine gun rang out over the Western Front, one thing was clear: mankind's military technology had wildly surpassed its medical capabilities. The war's new weaponry, from tanks to shrapnel, enabled slaughter on an industrial scale, and given the nature of trench warfare, thousands of soldiers sustained facial injuries. Medical advances meant that more survived their wounds than ever before, yet disfigured soldiers did not receive the hero's welcome they deserved. In The Facemaker, award-winning historian Lindsey Fitzharris tells the astonishing story of the pioneering plastic surgeon Harold Gillies, who dedicated himself to restoring the faces - and the identities - of a brutalized generation. Gillies, a Cambridge-educated New Zealander, became interested in the nascent field of plastic surgery after encountering the human wreckage on the front. Returning to Britain, he established one of the world's first hospitals dedicated entirely to facial reconstruction in Sidcup, south-east England. There, Gillies assembled a unique group of doctors, nurses and artists whose task was to recreate what had been torn apart. At a time when losing a limb made a soldier a hero, but losing a face made him a monster to a society largely intolerant of disfigurement, Gillies restored not just the faces of the wounded but also their spirits. Meticulously researched and grippingly told, The Facemaker places Gillies's ingenious surgical innovations alongside the poignant stories of soldiers whose lives were wrecked and repaired. The result is a vivid account of how medicine and art can merge, and of what courage and imagination can accomplish in the presence of relentless horror.
Visa hela texten

Lindsey Fitzharris is the author of The Butchering Art, which won the PEN/E.O. Wilson Prize for Literary Science Writing, and was shortlisted for the Wellcome Book Prize and the Wolfson History Prize. She received her doctorate in the History of Science, Medicine and Technology at the University of Oxford and was a post-doctoral research fellow at the Wellcome Institute. She contributes regularly to the Wall Street Journal, Scientific American and other notable publications.