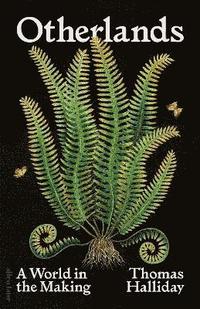 A World in the Making - A Sunday Times bestseller

av Dr Thomas Halliday
Inbunden Engelska, 2022-02-01
212
Köp
Spara som favorit
Finns även som
Visa alla 3 format & utgåvor
FOYLES NON-FICTION BOOK OF THE YEAR A SUNDAY TIMES TOP TEN BESTSELLER THE WAINWRIGHT PRIZE FOR NATURE WRITING - HIGHLY COMMENDED LONGLISTED FOR THE BAILLIE GIFFORD PRIZE FOR NON-FICTION 'The best book on the history of life on Earth I have ever read' Tom Holland 'Epically cinematic... A book of almost unimaginable riches' Sunday Times This is the past as we've never seen it before. Otherlands is an epic, exhilarating journey into deep time, showing us the Earth as it used to exist, and the worlds that were here before ours. Travelling back in time to the dawn of complex life, and across all seven continents, award-winning young palaeobiologist Thomas Halliday gives us a mesmerizing up close encounter with eras that are normally unimaginably distant. Halliday immerses us in a series of ancient landscapes, from the mammoth steppe in Ice Age Alaska to the lush rainforests of Eocene Antarctica, with its colonies of giant penguins, to Ediacaran Australia, where the moon is far brighter than ours today. We visit the birthplace of humanity; we hear the crashing of the highest waterfall the Earth has ever known; and we watch as life emerges again after the asteroid hits, and the age of the mammal dawns. These lost worlds seem fantastical and yet every description - whether the colour of a beetle's shell, the rhythm of pterosaurs in flight or the lingering smell of sulphur in the air - is grounded in the fossil record. Otherlands is a staggering imaginative feat: an emotional narrative that underscores the tenacity of life - yet also the fragility of seemingly permanent ecosystems, including our own. To read it is to see the last 500 million years not as an endless expanse of unfathomable time, but as a series of worlds, simultaneously fabulous and familiar.
Visa hela texten

This book takes us through the natural history of previous forms of life in the most beguiling way. It makes you think about the past differently and it certainly makes you think about the future differently. This is a monumental work and I suspect it will be a very important book for future generations -- Ray Mears, Chair of the Wainwright Prize for UK Nature Writing The word "original" is really overworked. But Thomas Halliday has produced a book the like of which I have never come across -- Jeremy Paxman An extraordinary history of our almost-alien Earth... Epically cinematic... The writing is so palpably alive. A book of almost unimaginable riches. It is a book that will make its own solid and lasting contribution. It could well be the best I read in 2022 - and I know it's only January -- James McConnachie * Sunday Times * A poet among palaeontologists -- David P. Barash * Wall Street Journal * A mesmerising journey into those vast stretches of Earth's pre-history that lie behind us, on such a scale that you experience a kind of temporal vertigo just thinking about it... [Halliday is] a brilliant writer, his lyrical style vividly conjuring myriad lost worlds... It's obviously a bit of a gamble choosing one's Book of the Year in March - but there's a very good chance already that mine will be Otherlands. Stunning -- Christopher Hart * Mail on Sunday * An impressive, tightly packed, long view of the natural world. In cinematic terms, this book would be a blockbuster... Riveting scientific reading; a remarkable achievement of imagination grounded in fact -- NJ McGarrigle * Irish Times * An immersive world tour of prehistoric life... Halliday never loses sight of the bigger picture, nimbly marshalling a huge array of insights thrown up by recent research. Each chapter gives not only a vivid snapshot of an ecosystem in action but also insights into geology, climate science, evolution and biochemistry... Mind-blowing -- Neville Hawcock * Financial Times * A sweeping, lyrical biography of Earth -- the geology, the biology, the extinctions and the ever-shifting ecology that defines our living planet -- Adam Rutherford * BBC Radio 4 Start the Week * Superb... [An] epic, near-hallucinatory natural history of the living earth... Dazzling -- Simon Ings * Telegraph * Remarkable... Ingenious... A work of immense imagination [...] rooted firmly in the actual science -- Stuart Kelly * Scotsman * A fascinating journey through Earth's history... [Halliday] is appropriately lavish in his depiction of the variety and resilience of life, without compromising on scientific accuracy... To read Otherlands is to marvel not only at these unfamiliar lands and creatures, but also that we have the science to bring them to life in such vivid detail -- Gege Li * New Scientist * Riveting... An intense and imaginative reading of fossils as runes that tell us about our own times, and possible future. Halliday is a Time Lord at heart, eager to lead us back to, say, the Permian or Oligocene epochs and unpack their lessons for 21st Century humanity. For all its scholarship, this is a very readable book, full of literary reference and accessible metaphor. Otherlands is also a wise manual for adaptive change rather than a prophecy of inevitable doom -- Matthew D'Ancona * Tortoise * Thomas Halliday offers a 550m-year tour of the incredible diversity of life that has existed on our planet... Halliday's trick is to tell his story in reverse. The first hominids exit early; the continents merge and drift and merge again; the sounds of the cretaceous forest fall silent as we pass beyond the evolution of birdsong. Life retreats from land to ocean, and the first eyes give way to the sightless world of the Ediacaran, an alien realm of crawling beings -- David Farrier * Prospect * A brilliant series of reconstructions of life in the deep past, richly imagined from the fine details of the fossil record... A real achievement... Reading Halliday's book is as near

Thomas Halliday is an Associate Research Fellow at the Department of Earth Sciences of the University of Birmingham. His PhD won the Linnean Society Medal for the best thesis in the biological sciences in the UK, and he won the Hugh Miller Writing Competition in 2018. He was raised in Rannoch in the Scottish Highlands, and now lives in London with his family.