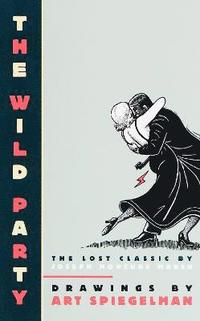 av Art Spiegelman
Häftad Engelska, 2020-09-03
162
Köp
Spara som favorit
Kan levereras innan julafton!
"Spiegelman's drawings are like demonic woodcuts: every angle, line, and curve jumps out at you. Stylishness and brutishness are in perfect accord." - The New York Times Art Spiegelman's sinister and witty black-and-white drawings give charged new life to Joseph Moncure March's Wild Party, a lost classic from 1928. The inventive and varied page designs offer perfect counterpoint to the staccato tempo of this hard-boiled jazz-age tragedy told in syncopated rhyming couplets. Here is a poem that can make even readers with no time for poetry stop dead in their tracks. Once read, large shards of this story of one night of debauchery will become permanently lodged in the brain. When The Wild Party was first published, Louis Untermeyer declared: "It is repulsive and fascinating, vicious and vivacious, uncompromising, unashamed . . . and unremittingly powerful. It is an amazing tour de force."
Visa hela texten

Art Spiegelman has been a staff artist and contributing editor at the New Yorker, as well as the cofounder/coeditor of RAW, the acclaimed magazine of avant-garde comics and graphics. In addition to Maus - which was awarded the Pulitzer Prize and twice nominated for the National Book Critics Circle Award - he is the author of Breakdowns and In the Shadow of No Towers. In January 2011, Art Spiegelman was awarded Le Grand Prix at the Angouleme International Comics Festival. From 2012 through 2014 a museum retrospective of his work, called Co-Mix, travelled to the Pompidou Center in Paris, the Ludwig Museum in Cologne, Germany, the Jewish Museum in New York, the Vancouver Art Gallery and the Art Gallery of Ontario. His most recent book is Si Lewen's Parade: An Artist's Oddyssey (2016). He lives in New York City with his wife, Francoise Mouly, and a cat named Voodoo.