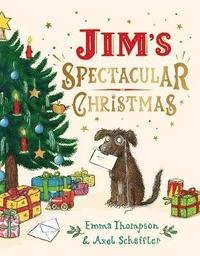 De som köpt den här boken har ofta också köpt If He Had Been with Me av Laura Nowlin (häftad).

A joyful stocking filler ... and a modern Christmas classic in the making. * The Times Children's Book of the Week * A funny, unexpected festive tale ... absolutely packed with charm. Great fun for big and little kids. * Independent * Written with wit and delight in words, and embellished with cosy, humorous pictures. * The Times * Heartfelt, witty and full of fun * Press Association * A magical tale that's part fiction and part true-life story * Woman & Home *

Dame Emma Thompson (Author) Dame Emma Thompson is one of the world's most critically lauded and respected talents for her versatility in acting as well as screenwriting. She is the sole artist thus far to have received an Academy Award for both acting (Howards End) and screenwriting (Sense and Sensibility). In June of 2018 she was appointed a Dame Commander of the Order of the British Empire. Last May she starred opposite Emma Stone in the hit Disney feature film Cruella. Also in 2021, she shot three additional feature films back-to-back: What's Love Got to Do With It, starring Lily James and Shazad Latif, directed by Shekhar Kapur from a screenplay by Jemima Khan; Good Luck To You, Leo Grande, co-starring Daryl McCormack, based on the original screenplay by British Comedy award-winner Katy Band for director Sophie Hyde; and the film adaptation of Tim Minchin's hit stage musical Matilda, based on the Roald Dahl classic novel, in which she plays the dreaded school headmistress, 'Trunchbull', for director Matthew Warchus. Thompson starred as the title character in both Nanny McPhee and Nanny McPhee Returns, for both of which she also wrote the screenplay, based on Christiana Brand's Nurse Matilda stories and was an Executive Producer on the latter. She is currently developing a stage musical on the character. Thompson was commissioned to write the 24th, 25th and 26th tales in the existing collection of Peter Rabbit stories beginning in 2014, the only author since Beatrix Potter to do so. Axel Scheffler (Illustrator) Axel Scheffler was born in Hamburg, Germany in 1957. He studied history of art in Hamburg, before moving to the United Kingdom to study illustration at Bath Academy of Art in 1982. Since then he has worked as a freelance illustrator in London. He is best known for the children's books he has illustrated through his partnership with author, Julia Donaldson. Together they created The Gruffalo, which has sold over 17 million copies, in 105 countries throughout the world. He lives in London.