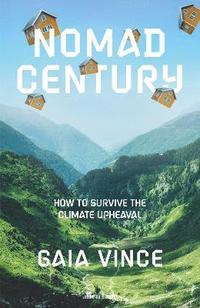 How to Survive the Climate Upheaval

av Gaia Vince
Inbunden Engelska, 2022-08-25
210
Köp
Spara som favorit
Kan tyvärr inte levereras innan julafton.
Finns även som
Visa alla 3 format & utgåvor
Longlisted for the Financial Times Business Book of the Year award 'Gaia Vince's new book should be read not just by every politician, but by every person on the planet' Observer An urgent investigation of the most underreported, seismic consequence of climate change: how it will force us to change where - and how - we live We are facing a species emergency. With every degree of temperature rise, a billion people will be displaced from the zone in which humans have lived for thousands of years. While we must do everything we can to mitigate the impact of climate change, the brutal truth is that huge swathes of the world are becoming uninhabitable. From Bangladesh to Sudan to the western United States, and in cities from Cardiff to New Orleans to Shanghai, the quadruple threat of drought, heat, wildfires and flooding will utterly reshape Earth's human geography in the coming decades. In this rousing call to arms, Royal Society Science Book Prize-winning author Gaia Vince describes how we can plan for and manage this unavoidable climate migration while we restore the planet to a fully habitable state. The vital message of this book is that migration is not the problem - it's the solution. Drawing on a wealth of eye-opening data and original reporting, Vince shows how migration brings benefits not only to migrants themselves, but to host countries, many of which face demographic crises and labour shortages. As Vince describes, we will need to move northwards as a species, into the habitable fringes of Europe, Asia and Canada and the greening Arctic circle. While the climate catastrophe is finally getting the attention it deserves, the inevitability of mass migration has been largely ignored. In Nomad Century, Vince provides, for the first time, an examination of the most pressing question facing humanity.
Visa hela texten

With the government's migration policy in such appalling disarray, Gaia Vince's Nomad Century has to be the most timely book of the year. Vince's calm, compassionate and authoritative explanation of the inevitability of migration is essential reading... There should be a copy on every desk in Whitehall -- Michael Brooks, Books of the Year * New Statesman * A tour de force... Nomad Century should be on the reading list of anyone and everyone in any position of power. It is not simply a future atlas of human geography showing where will be habitable and for how many, but a hard-hitting must-read on how we will need to live in the coming decades to secure the long-term survival of humankind -- Anjana Ahuja * Financial Times * Essential, bold and clear-sighted... I have yet to read a book that takes the question of how to survive the coming decades more seriously -- David Farrier * Prospect * A powerful, provocative argument * Nature * After a summer of climate catastrophes, not least the appalling floods that left a third of Pakistan under water at the end of August, now should be the moment to consider radical solutions -- Philippa Nuttall * New Statesman * Engaging and constructive... Vince leaves the reader with more than a few sparks of hope * Herald * Gaia Vince's new book should be read not just by every politician, but by every person on the planet, because it lays out, much more clearly than any existing scientific assessment, the world we are creating through global heating... Passionate and powerful -- Bob Ward * Observer * Powerful... It holds much wisdom with which to tackle the challenges of our turbulent century... Nomad Century is a visionary book, an attempt to imagine how climate change might reshape our notions of what is politically possible -- Ben Cooke * The Times * Nomad Century is a landmark work - terrifying in its message and urgency, but ultimately empowering in its conviction about a path forward. Gaia Vince lays bare the scale of the challenge before us, and the grand ideas that will be needed to meet it. We must be ready; this book shows us how -- Ed Yong Once again Gaia Vince demonstrates that she is one of the finest science writers at work today -- Bill Bryson The climate crisis already has millions of people on the move, and that number will steadily grow higher till it breaks the political structures of the planet - unless, as the author suggests, we start now to remake those structures so they can cope, and indeed benefit, from the flow of humans that is now inevitable. An important and provocative start to a crucial conversation -- Bill McKibben This book is a rather astounding addition to a growing body of thought that suggests the twenty-first century is going to include, and even require, lots of human migration-and that handled correctly, this could be part of a good adaptation to the climate and biosphere crisis we are now entering. What Vince gives us here is some cognitive mapping to understand the situation and see a way forward -- Kim Stanley Robinson Vince's perspectives and proposals are refreshing in a world where a Don't-Look-Up-style denial is solidly in place... If this book results in even a smidgeon more sympathy for the huge numbers of people being forced away from their homes, that will be a great thing -- Sally Hayden * Irish Times * Nomad Century is the most important book I imagine I'll ever read. Gaia Vince calmly -- without drum-banging or hand-wringing -- sets forth likely consequences and end-of-century projections for our rapidly changing planet. It'll knock you flat. But before you hit the ground, she hands over an impressively detailed survival plan: supporting radical migration from newly uninhabitable regions, rethinking urban structures and food practices, restoring climate. The book is heavily researched, but Gaia's clean, intelligent prose propels the reader -- Mary Roach Terrifying, yet strangely hopeful and immensely important. I'm not sure if you can 'lo

Gaia Vince is an honorary senior research fellow at UCL and a science writer and broadcaster interested in the interplay between humans and the planetary environment. She has held senior editorial posts at Nature and New Scientist, and her writing has appeared in the Guardian, The Times and Scientific American. Her research takes her across the world: she has visited more than 60 countries, lived in three and is currently based in London. In 2015, she became the first woman to win the Royal Society Science Book of the Year Prize solo for her debut, Adventures in the Anthropocene.