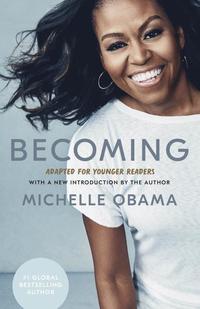 av Michelle Obama
Inbunden Engelska, 2021-03-02
9-12 år
196
Köp
Spara som favorit
Finns även som
Visa alla 1 format & utgåvor
*A younger reader's edition of the number-one bestselling memoir by former first lady of the United States, Michelle Obama. With a new introduction from Mrs Obama herself* What's important is our story, our whole story, including those moments when we feel a little vulnerable . . . Michelle Robinson started life sharing a bedroom with her older brother Craig, in their family's upstairs apartment in her great-aunt's house. Her parents, Fraser and Marian, poured their love and energy into their children. She would go on to become Michelle Obama, the inspirational First Lady of the United States of America. Now adapted for younger readers, with new photographs and a new introduction from Michelle Obama herself, this memoir tells a very personal, and completely inspiring, story of how, through hard work and determination, the girl from the South Side of Chicago built an extraordinary life. A tale of ups and downs, triumphs and failures, this is an incredibly honest account. It will take you from the early years - first kiss, first school, first love - to the wonders of the White House, and the moment Mrs Obama shook hands with the Queen of England. A book to read, share, and talk about with the adults in your life, this is a call to action and compassion, and hope for change in uncertain times, and in a scary world. You'll be inspired to help others, and understand that no one is perfect. Just like Michelle Obama, you too are finding out exactly who you want to be (and, actually, so are the adults in your life). Above all, it is a book to make you think: who are you, and what do you want to become?
Visa hela texten

REVIEWS FOR THE ORIGINAL EDITION OF BECOMING 'A rich, entertaining and candid memoir. And overall Obama's a fun person to sit alongside as she tells you the story of her life . . . it is as beautifully written as any piece of fiction' Independent 'A genuine page-turner, full of intimacies and reflections' Evening Standard 'Offers new insights into her upbringing on the south side of Chicago and the highs and lows of life with Barack Obama . . . a refreshing level of honesty about what politics really did to her' Guardian 'An inspirational memoir that also rings true' Daily Telegraph * Various *

Michelle Robinson Obama served as First Lady of the United States from 2009 to 2017. A graduate of Princeton University and Harvard Law School, Mrs. Obama started her career as an attorney at the Chicago law firm Sidley & Austin, where she met her future husband, Barack Obama. She later worked in the Chicago mayor's office, at the University of Chicago, and at the University of Chicago Medical Center. Mrs. Obama also founded the Chicago chapter of Public Allies, an organization that prepares young people for careers in public service. The Obamas currently live in Washington, D.C., and have two daughters, Malia and Sasha.