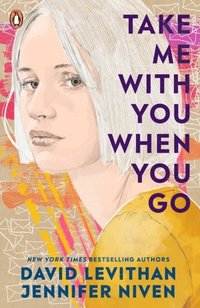 Take Me With You When You Go

av David Levithan, Jennifer Niven
Häftad Engelska, 2021-08-31
12-15 år
93
Köp
Spara som favorit
Finns även som
Visa alla 6 format & utgåvor
Subject: You. Missing. Ezra wakes one day to find his sister gone. No note, no sign, nothing but an email address hidden somewhere only he would find it. Escaping their toxic home life, Bea finds herself alone in a new city - without friends, without a real plan - chasing someone who might not even want to be found. As things unravel at home for Ezra, Bea confronts secrets about their past that will forever change the way they think about their family. Separated by distance but connected by love, this brother and sister must learn to trust themselves before they can find a way back to each other. From the New York Times bestselling authors of All the Bright Places and Every Day comes a story of hope, family, and finding your true home in the people who matter the most.
Visa hela texten

David Levithan's many acclaimed novels include Someday, Another Day, Every Day, Two Boys Kissing, and Boy Meets Boy. His bestselling collaborations include Nick & Norah's Infinite Playlist and the Dash & Lily series (both written with Rachel Cohn) and Will Grayson, Will Grayson (written with John Green). In 2016, David was named the recipient of the Margaret A. Edwards Award for his contribution to YA literature. You can learn more about him at davidlevithan.com and follow him on Twitter at @loversdiction. Jennifer Niven is the #1 New York Times and internationally bestselling author of All the Bright Places, Holding Up the Universe and Breathless, in addition to several novels for adults. Her books have been translated into over 75 languages and won literary awards around the world. When she isn't working on multiple book and TV projects, Jennifer also oversees Germ, a literary web magazine for high school age and beyond. She divides her time between coastal Georgia and Paris with her husband and literary cats.