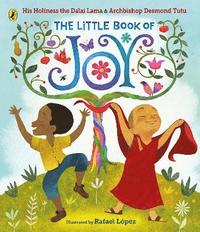 The Little Book of Joy

av His Holiness Dalai Lama, Desmond Tutu
Inbunden Engelska, 2022-09-27
3-6 år
147
Köp
Spara som favorit
Kan levereras innan julafton!
Finns även som
Visa alla 4 format & utgåvor
Joy is the warm tingly feeling of the sun tickling your toes in the morning. It's the giggly, squiggly feeling when you are doing something silly. Even when you wake to the rain and your joy is washed away, it's waiting at the bottom of the puddle. Two friends, the late Archbishop Desmond Tutu and His Holiness the Dalai Lama, share this uplifting picture book story about their childhoods, showing young readers how to find joy even in uncertain times. This is a charming story of how every child has joy inside them, even when it sometimes hides, and how we can find it, keep it close, and grow it by sharing it with the world. This picture book adaptation of the international bestseller, The Book of Joy, is full of the humour, friendship, and deep affection between two spiritual leaders. It is a timely gift for challenging times and a reminder that joy is abundant - no matter what challenges we face - if we only know how to find it. Vibrantly illustrated by award-winning Rafael Lopez, this is a perceptive, joyful hug of a picture book, perfect to reassure and inspire all young readers.
Visa hela texten

Dalai Lama (Author) His Holiness the 14th Dalai Lama, Tenzin Gyatso, describes himself as a simple Buddhist monk. He is the spiritual leader of the Tibetan people and of Tibetan Buddhism. He was awarded the Nobel Peace Prize in 1989 and the US Congressional Gold Medal in 2007. The Dalai Lama travels extensively, promoting kindness and compassion, interfaith understanding, respect for the environment, and, above all, world peace. He lives in exile in Dharamsala, India. https://www.dalailama.com/ | @DalaiLama Desmond Tutu (Author) Desmond Mpilo Tutu, Archbishop Emeritus of Southern Africa, became a prominent leader in the crusade for justice and racial reconciliation in South Africa. He was awarded the Nobel Peace Prize in 1984 and the Presidential Medal of Freedom in 2009. Archbishop Tutu was regarded as a leading moral voice and an icon of hope. Throughout his life, he cared deeply about the needs of people around the world, teaching love and compassion for all. Rafael Lopez (Illustrator) Rafael Lopez is an internationally recognized illustrator and artist. His illustrations bring diverse characters to children's books, and he is driven to produce and promote books that reflect the lives of all young people. He is the recipient of the 2017 Tomas Rivera Mexican American Children's Book Award, three Pura Belpre honors, and two Americas Awards. He splits his time between San Diego and San Miguel de Allende, Mexico.