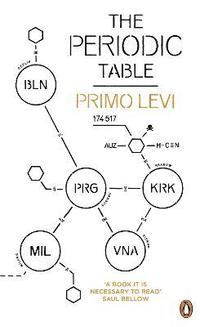 av Primo Levi
Häftad Engelska, 2012-04-05
103
Köp
Spara som favorit
Finns även som
Visa alla 3 format & utgåvor
'So it happens, therefore, that every element says something to someone' Inspired by the rhythms of the Periodic Table, Primo Levi assesses his life in terms of the chemical elements he associates with his past. From his birth into an Italian Jewish family through his training as a chemist, to the pain and darkness of the Holocaust and its aftermath, Levi reflects on the difficult course of his life in this heartfelt and deeply moving book.
Visa hela texten

In 1919, Primo Levi was born into a Jewish family in Turin, Italy, in 1919. Despite the anti-Semitic laws introduced to Italy by Mussolini's government, he was able to complete his degree in Chemistry at Turin University in 1941. When the Germans invaded northern Italy in 1943, Levi escaped to the mountains to join a group of anti-fascist partisans but was soon captured and eventually deported to Auschwitz. He was liberated in January 1945. After the war he resumed his career as a chemist, retiring only in 1975. His graphic account of his time in Auschwitz, If This is a Man, was published in 1947. Levi went on to write many other books, including The Wrench, If Not Now, When? and The Periodic Table, emerging not only as one of the most profound and haunting commentators on the Holocaust, but as a great writer on many twentieth-century themes, especially science. Primo Levi committed suicide on 11 April 1987.