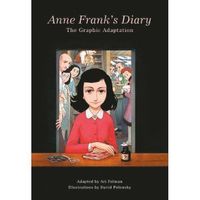 av Anne Frank
Häftad Engelska, 2018-10-02
153
Köp
Spara som favorit
The First Graphic Adaptation of the Multi-Million Bestseller '12th June, 1942: I hope I will be able to confide everything to you, as I have never been able to confide in anyone, and I hope you will be a great source of comfort and support.' In the summer of 1942, fleeing the horrors of the Nazi occupation, Anne Frank and her family were forced into hiding in the back of an Amsterdam warehouse. Aged thirteen when she went into the secret annexe, Anne Frank kept a diary in which she confided her innermost thoughts and feelings, movingly revealing how the eight people living under these extraordinary conditions coped with the daily threat of discovery and death. Adapted by Ari Folman, illustrated by David Polonsky, and authorized by the Anne Frank Foundation in Basel, this is the first graphic edition of the beloved diary of Anne Frank. 'Faithful to the spirit and often the language of the diary... Mr Polonsky's beautiful artwork offers a charming and convincing view of Anne on the page' THE ECONOMIST 'Folman and Polonsky have reclaimed Anne Frank in all of her humanity, and they allow us to witness for ourselves her beauty, courage, vision and imagination. And, in doing so, they have elevated the tools of the comic book to create an astonishing work of art.' JEWISH JOURNAL 'The illustrations [. . .] retell Anne's diary with great compassion, wit and ebullience' StANDPOINT
Visa hela texten

Astonishing and excruciating. It gnaws at us still * New York Times Book Review * A modern classic * The Times * One of the greatest books of the [last] century * Guardian * Rings down the decades as the most moving testament to the persecution of innocence * Daily Mail * Of all the multitudes who throughout history have spoken for human dignity in times of great suffering and loss, no voice is more compelling than that of Anne Frank -- John F. Kennedy A masterpiece * Il Mattino (Italy) * A remarkable reading and visual experience * Frankfurter Neue Presse (Germany) * Mesmerizing... Polonsky creates unforgettable panels that enable us to see Anne Frank's writing in a fresh light * Frankfurter Allgemeine Zeitung (Germany) * Folman and Polonsky . . . focus on illuminating its humor, insight, and supporting cast in this spirited graphic adaption . . . Anne, drawn with large dark eyes, blooms like the hardiest, loveliest weed-a moody teenager whose wit, self-awareness, and rich fantasy life take center stage . . . The beauty of Anne's life and the untarnished power of her legacy-here further elevated by Folman and Polonsky-are heartening reminders of the horror of her fate. * Publishers Weekly * Evocatively crafted, this comic brings Frank's world to life for all ages but takes care to respect and prioritize the primacy of her story in her own words. * Library Journal * 'Even deep sleep brings no redemption,' she writes. 'The dreams still creep in.' Those dreams bring out the best of the illustrations amid the depictions of the everyday confinement in which Anne, her family, and others are hiding. A different format distills and renews Frank's achievement. * Kirkus Reviews * Emphasizes the visual nature of Frank's text . . . Bring[s] renewed vigor . . . Powerful . . . points us to the very gap, between what we, her readers, can imagine for her of her missed future, and what she would never have the opportunity to live through. * Women's Review of Books * Faithful to the spirit and often the language of the diary, with passages that capture Anne's sharp sense of humour, as well as her frustrations with her mother, her agitation with her sister (with whom she feels unfavourably compared), her sexual curiosity, fleeting infatuations, dark moods, mortal fears and internal conflicts... Mr Polonsky's beautiful artwork offers a charming and convincing view of Anne on the page * Economist * The graphic adaptation gorgeously captures the confessional spirit of the original diary with artistic expressions of Anne's inner world. The book illustrates and expands on Anne's dreams and imaginings, and one can almost believe that these are pictures Anne herself might have drawn as she was turning things over in her mind. * Bookriot * Folman and Polonsky have reclaimed Anne Frank in all of her humanity, and they allow us to witness for ourselves her beauty, courage, vision and imagination, all of the qualities that make her life and early death so heartbreaking. And, in doing so, they have elevated the tools of the comic book to create an astonishing work of art. * Jewish Journal * Remarkable * Herald * Folman and Polonsky's adaptation brings poignant comedy and a touch of the surreal to its portrait of the eight inhabitants of the annexe * The Telegraph * Elegantly drawn * Jewish Chronicle * In producing this first ever graphic adaptation of the diary Ari Folman and David Polonsky continue Anne's work, doing a great service to younger and future generations by helping to keep the story of Anne Frank as fresh, compelling and vital as it ever was. * The New European * The adaptation by Ari Folman is refreshing, well researched and innovative. The art by David Polonsky is stunning, vivid, and rich. Altogether, it's a graphic novel that is more than essential reading * Graphic Policy * The illustrations in Anne Frank's Diary: The Graphic Novel have... [a] polished, often luminous effect. * The Times * Impressive. . . In an afterword, Ari Folman discu

Anne Frank was born on 12 June 1929. She died in Bergen-Belsen, three months short of her sixteenth birthday. Ari Folman is a film director, screenwriter and film score composer, who directed the Oscar-nominated Waltz with Bashir. David Polonsky is an award-winning illustrator and designer.