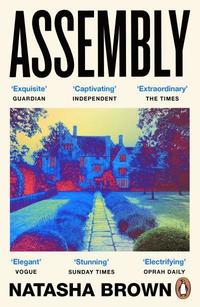 av Natasha Brown
Häftad Engelska, 2022-05-05
102
Köp
Spara som favorit
Finns även som
Visa alla 5 format & utgåvor
SHORTLISTED FOR THE FOLIO PRIZE 2022 SHORTLISTED FOR THE GOLDSMITHS PRIZE 2021 SHORTLISTED FOR THE BOOKS ARE MY BAG FICTION AWARD 2021 SHORTLISTED FOR THE BETTY TRASK PRIZE 2022 LONGLISTED FOR THE DESMOND ELLIOTT PRIZE 2022 'Diamond-sharp, timely and urgent' Observer, Best Debuts of 2021 'Subtle, elegant, scorching' Vogue 'Virtuosic, exquisite, achingly unique' Guardian 'I'm full of the hope, on reading it, that this is the kind of book that doesn't just mark the moment things change, but also makes that change possible' Ali Smith 'Exquisite, daring, utterly captivating. A stunning new writer' Bernardine Evaristo Come of age in the credit crunch. Be civil in a hostile environment. Step out into a world of Go Home vans. Go to Oxbridge, get an education, start a career. Do all the right things. Buy a flat. Buy art. Buy a sort of happiness. But above all, keep your head down. Keep quiet. And keep going. The narrator of Assembly is a Black British woman. She is preparing to attend a lavish garden party at her boyfriend's family estate, set deep in the English countryside. At the same time, she is considering the carefully assembled pieces of herself. As the minutes tick down and the future beckons, she can't escape the question: is it time to take it all apart? 'One of the most talked-about debuts of the year . . . You'll read it in one sitting' Sunday Times Style 'Expertly crafted, remarkable, astonishing... A literary debut with flavours of Jordan Peele's Get Out' Bookseller, Editor's Choice 'Virginia Woolf's Mrs. Dalloway meets Citizen by Claudia Rankine... As breathtakingly graceful as it is mercilessly true' Olivia Sudjic 'Bold and original, with a cool intelligence, and so very truthful about the colonialist structure of British society' Diana Evans 'This marvel of a novel manages to say all there is to say about Britain today' Sabrina Mahfouz
Visa hela texten

Diamond-sharp, timely and urgent... Written in a distilled, minimalist prose, Assembly is illuminating on everything from micro aggressions in the workplace, to the reality of living in the "hostile environment", to the legacy of British colonialism * Observer, Best Debuts of 2021 * A quiet, measured call to revolution. It's about everything that has changed and still needs to change, socially, historically, politically, personally... Its impact is massive; it strikes me as the kind of book that sits on the faultline between a before and an after. I could use words like 'elegant' and 'brilliantly judged' and literary antecedents such as Katherine Mansfield/Toni Morrison/Claudia Rankine. But it's simpler than that. I'm full of the hope, on reading it, that this is the kind of book that doesn't just mark the moment things change, but also makes that change possible -- Ali Smith, author of 'How to be both' and 'Summer' In just 100 pages Natasha Brown delivers a body blow of a book. Assembly is extraordinary, each word weighed, each detail meticulously crafted... Brown is mercilessly clear-eyed in her delineation of how British culture is also "assembled" - its history whitewashed and arguing against it near-impossible when "the only tool of expression is the language of this place". Yet she wields that language like a weapon and hits her mark again and again with devastating elegance * The Times * Incredible. [Assembly] moves the English novel on. Slim book, massive importance -- Max Porter, author of 'Grief is the Thing With Feathers' Stunning, blisteringly eloquent... Assembly heralds a powerful new voice in British literature * The Sunday Times * Assembly is brilliant. Virginia Woolf's Mrs. Dalloway meets Citizen by Claudia Rankine. Natasha Brown's ability to slide between the tiniest, most telling detail and the edifice of history, the assemblage of so many lives in so many times and places, is as breathtakingly graceful as it is mercilessly true -- Olivia Sudjic, author of 'Asylum Road' Daring and distilled... A hauntingly accurate novel about the stories we construct for ourselves and others... A completely captivating read you won't be able to put down * Independent * Assembly fulfils, with exquisite precision, Virginia Woolf's exhortation to "record the atoms as they fall upon the mind in the order in which they fall... [It] calls to mind Frantz Fanon's work on the psychic ruptures caused by the experience of being colonised, or W. E. B. Du Bois's idea of double consciousness. Assembly is the kind of novel we might have got if Woolf had collaborated with Fanon... Brown nudges us towards an expression of the inexpressible - towards feeling rather than thought, as if we are navigating the collapsing boundaries between the narrator's consciousness and our own * Guardian * I read it compulsively in a single sitting. Assembly expertly draws out the difficulties of assembling a coherent self in the face of myriad structural oppressions. Casting a wry look at faded aristocrats, financial insiders and smug liberals, Natasha Brown takes the conventional tics of the English novel - the repressed emotion and clipped speech - and drains away the nostalgia. What's left is something hard and true -- Will Harris, author of 'Mixed Race Superman' and 'Rendang' It more than lives up to the hype. Propulsive, devastating, unflinching and deft... This is a heartbreaking novel that offers glimmers of hope with its bold vision for new modes of storytelling... Brown's voice is entirely her own - and Assembly is a wry, explosive debut from a coruscating new talent * inews * A powerhouse of a book * Stylist * Set over 24 hours as an unnamed Black British woman prepares to attend a garden party hosted by her boyfriend's wealthy parents. With a clear eye she assesses her experience of corporate culture with its embedded racism, her awful boss, the myth of true social mobility... A short but exceptionally powerful n

Natasha Brown has spent a decade working in financial services, after studying Maths at Cambridge University. She developed Assembly after receiving a 2019 London Writers Award in the literary fiction category.