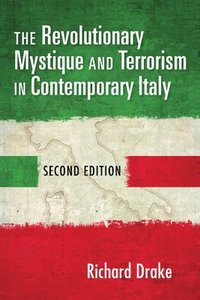 The Revolutionary Mystique and Terrorism in Contemporary Italy

av Richard Drake
Inbunden Engelska, 2021-03-02
768
Köp
Spara som favorit
Finns även som
Visa alla 1 format & utgåvor
What drives terrorists to glorify violence? In The Revolutionary Mystique and Terrorism in Contemporary Italy, Richard Drake seeks to explain the origins of Italian terrorism and the role that intellectuals played in valorizing the use of violence for political or social ends. Drake argues that a combination of socioeconomic factors and the influence of intellectual elites led to a sanctioning of violence by revolutionary political groups in Italy between 1969 and 1988. Drake explores what motivated Italian terrorists on both the Left and the Right during some of the most violent decades in modern Italian history and how these terrorists perceived the modern world as something to be destroyed rather than reformed. In 1989, The Revolutionary Mystique and Terrorism in Contemporary Italy received the Howard R. Marraro Prize from the Society for Italian Historical Studies. It was awarded for the best book that year on Italian history. The book is reissued now with a new introduction for the light it might shed on current terrorist challenges. The Italians had success in combating terrorism. We might learn something from their example. The section of the book dealing with the Italian "superfascist" philosopher, Julius Evola, holds special interest today. Drake's original work takes on new significance in the light of Evola's recent surge of popularity for members of America's alt-right movement.
Visa hela texten

This volume constitutes one of the very few informed and updated, documented and balanced syntheses of both terrorist phenomena in the years of lead, the black as well as the red.Though the entire volume is dense with particulars and rich in acute and precise observations, its originality and depth depend above all on an exploration of the revolutionary mystique.its many merits include a sober, even brilliant style, a taut and well-paced narration, rich in details and never prolix.a study of great value and interest. -- Gianfranco Pasquino * Polis: Ricerche e Studi su Societa e Politica in Italia * Though as complete a chronicle as the present state of the documentation permits, [the book] aims to seek out the cultural and historical roots of the [terrorist] phenomenon in the political history and even more in the history of the mentalities of a country traditionally characterized by violence. * Revue Francaise de Science Politique * Highly readable. Drake has chosen one of the most absorbing stories in contemporary history for his theme, and he tells it with a distinct literary flare. * American Historical Review * The definitive work in English on that troubled period in Italian history. * New York City Tribune * The Revolutionary Mystique and Terrorism in Contemporary Italy will add immensely to our understanding of and appreciation for a country tormented at various times in the past century. * Mediterranean Quarterly * A lucid and convincing account of the events of the 1970s and, more interestingly, of the beliefs that led many Italians to feel it was their duty to overthrow the existing order through violence. * International Affairs * A tragic account of the bankruptcy of those leftists, such as the Red Brigades, who took their ideology to illogical extremes, thus, bankrupting their own political tradition and dehumanizing themselves and their perceived enemies. * L'Italo-Americano *

Richard Drake is the Lucile Speer Research Professor in Politics and History at the University of Montana. His other book publications are Byzantium for Rome: The Politics of Nostalgia in Umbertian Italy, 1878-1900, The Aldo Moro Murder Case, Apostles and Agitators: Italy's Marxist Revolutionary Tradition, The Education of an Anti-Imperialist: Robert La Follette and U.S. Expansion, and Charles Austin Beard: The Return of the Master Historian of American Imperialism.

Introduction for the Second Edition Acknowledgments Introduction: Contemporary Italian Terrorism and the Limits of History 1. The Two Faces of Italian Terrorism: 1969-1974 2. Surging Red Brigadism: 1975-1977 3. Living the Revolution 4. Aldo Moro and Italy's Difficult Democracy 5. 7 aprile 1979 6. The Blast Furnace of Terrorism: 1979-1980 7. The Children of the Sun 8. The Crisis and Defeat of the Red Brigades: 1980-1982 Conclusion Glossary Notes Bibliography Index