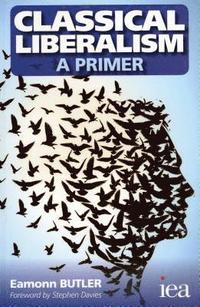 av Eamonn Butler
Häftad Engelska, 2015-07-20
129
Köp
Spara som favorit
Kan tyvärr inte levereras innan julafton.
Finns även som
Visa alla 2 format & utgåvor
Classical liberalism is one of the most important political and social philosophies. Indeed, this set of ideas was crucial in bringing the modern world into existence. It fostered a political climate in which economies were free to develop and government limited in scope, essential conditions for the unprecedented increases in living standards seen over the last two centuries. Yet despite its huge contribution, today classical liberalism is poorly understood and often misrepresented, its insights neglected in an era of pervasive state intervention. Eamonn Butler's primer is therefore extremely welcome. It is an extremely clear and well set out introduction to this way of thinking. As such, it is highly suitable for students of the social sciences and makes a valuable contribution to greater understanding of a perspective that is enjoying a long overdue revival.
Visa hela texten

Eamonn Butler is director of the Adam Smith Institute, a leading policy think tank. He has degrees in economics and psychology, a PhD in philosophy, and an honorary Doctor of Letters. In the 1970s he worked in Washington for the US House of Representatives, and taught philosophy at Hillsdale College, Michigan, before returning to the UK to help found the Adam Smith Institute. He is a former winner of the UK's National Free Enterprise Award. Eamonn is author of books on the pioneering economists Milton Friedman, F. A. Hayek and Ludwig von Mises, a primer on the Austrian School of Economics and a 'Condensed Wealth of Nations'. For the IEA, he has written primers on Adam Smith, Ludwig von Mises and public choice theory; his 'Foundations of a Free Society' won the Fisher Prize in 2014. He is co-author of a history of wage and price controls, and of a series of books on IQ. His recent popular publications, 'The Best Book on the Market', 'The Rotten State of Britain' and 'The Alternative Manifesto', attracted considerable attention, and he is a frequent contributor to print and broadcast media.