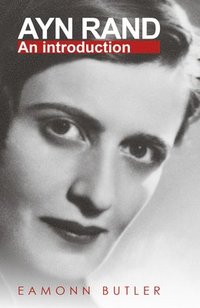 av Eamonn Butler
Häftad Engelska, 2018-06-29
163
Köp
Spara som favorit
Kan levereras innan julafton!
Who is AYN RAND? Few 20th century intellectuals have been as influential - and controversial - as the novelist and philosopher Ayn Rand. Her thinking still has a profound impact, particularly on those who come to it through her novels, Atlas Shrugged and The Fountainhead - with their core messages of individualism, self-worth, and the right to live without the impositions of others. Even though ignored or scorned by some academics, traditionalists, progressives, and public intellectuals, she remains a major influence on many of the world's leading legislators, policy advisers, economists, entrepreneurs and investors. Why does Rand's work remain so influential? Ayn Rand: An Introduction illuminates Rand's importance, detailing her understanding of reality and human nature, and explores the ongoing fascination with and debates about her conclusions on knowledge, morality, politics, economics, government, public issues, aesthetics and literature. The book also places these in the context of her life and times, showing how revolutionary they were, and how they have influenced and continue to impact public policy debates.
Visa hela texten

Eamonn Butler is director of the Adam Smith Institute, a leading policy think tank. He has degrees in economics and psychology, a PhD in philosophy, and an honorary Doctor of Letters. In the 1970s he worked in Washington for the US House of Representatives, and taught philosophy at Hillsdale College, Michigan, before returning to the UK to help found the Adam Smith Institute. He is a former winner of the UK's National Free Enterprise Award. Eamonn is author of books on the pioneering economists Milton Friedman, F. A. Hayek and Ludwig von Mises, a primer on the Austrian School of Economics and a 'Condensed Wealth of Nations'. For the IEA, he has written primers on Adam Smith, Ludwig von Mises, Classical Liberalism and public choice theory; his 'Foundations of a Free Society' won the Fisher Prize in 2014. He is co-author of a history of wage and price controls, and of a series of books on IQ. His recent popular publications, 'The Best Book on the Market', 'The Rotten State of Britain' and 'The Alternative Manifesto', attracted considerable attention, and he is a frequent contributor to print and broadcast media.