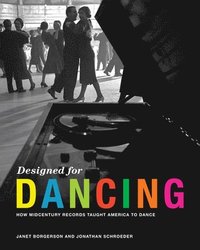 Borgerson and Schroeder begin with the record covers-memorable and striking, but largely designed and created by now-forgotten photographers, scenographers, and illustrators-which were central to the way records were conceived, produced, and promoted. Dancing allowed people to sample aspirational lifestyles, whether at the Plaza or in a smoky Parisian café, and to affirm ancestral identities with Irish, Polish, or Greek folk dancing. Dance records featuring ethnic music of variable authenticity and appropriateness invited consumers to dance in the footsteps of the Other with "hot" Latin music, Afro-Caribbean rhythms, and Hawaiian hulas. Bought at a local supermarket, department store, or record shop, and listened to in the privacy of home, midcentury dance records offered instruction in how to dance, how to dress, how to date, and how to discover cool new music-lessons for harmonizing with the rest of postwar America.
Visa hela texten