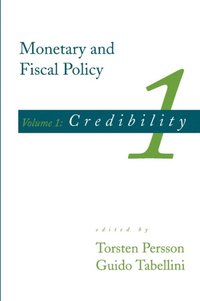 av Torsten Persson, Guido Tabellini
E-bok (PDF - DRM), Engelska, 1994-06-29
659
Ladda ned
Spara som favorit
Laddas ned direkt
Läs i vår app för iPhone, iPad och Android
How will the private sector react to different governmental policies? What policies will produce the most desirable outcomes? These two volumes bring together major contributions to a new theory of macroeconomic policy that analyzes which policies are credible or politically feasible, topics that are central to the practical policy debate but that traditional theory cannot address. Instead of looking at policy as an end product, the contributors approach policy as an ongoing process of revised goals, changes in tactics, and political pressures. They consider what kinds of incentives, within different institutional settings, drive policymaking and the behavior of policymakers. This approach allows more informed answers to questions of which policies are credible and which are politically feasible. It explains why certain monetary and fiscal policies get implemented, and provides insights into situations that occur repeatedly in macroeconomic policy such as the bias toward government deficits, partisan competition, and central bank independence.Volume 1 examines problems of policy credibility caused by incentives to deviate from announced policy. Volume 2 looks at feasibility problems caused by political pressures generated by the electoral process, the politics of the public debt, issues of the redistribution of wealth, and conflict over the need for economic reforms. Sections are arranged so that the first chapter introduces a topic while those that follow expand on it. The editors provide substantial introductions to each volume as well as short comments at the beginning of each section within the volumes.
Visa hela texten