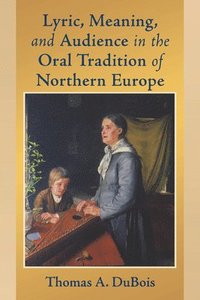 Lyric, Meaning, and Audience in the Oral Tradition of Northern Europe

av Thomas A Dubois
Häftad Engelska, 2006-12-01
407
Köp
Spara som favorit
Focusing on particular characters, situations, or emotions-usually with little or no explicit plot-lyric song poses interpretive challenges to the listening audience. Without an overt plot, how does one understand what a song is about? Are there rules or norms for how to interpret them? Do these rules remain the same from culture to culture, or do they vary? By looking at the ways in which cultures in Northern Europe interpret lyric songs, Thomas A. DuBois illuminates both commonalities of interpretive practice and unique features of their musical traditions. DuBois draws on sets of lyric songs from England, Wales, Scotland, Ireland, Norway, Sweden, and Finland to explore the question of meaning in folklore, especially the role of traditional audiences in appraising and understanding nonnarrative songs. DuBois's examples range from the medieval and early modern periods to the late twentieth century. His nuanced study explicates folk practices of interpretation-a "native hermeneutics" existing alongside folk songs in North European oral tradition. He examines lyric songs-particularly formal laments-embedded with prose or poetic narratives; the ritual use of lyric as charms and laments in premodern Europe; the development of personalized meanings within hymns and devotional prayers of the high Middle Ages; Shakespeare's lyric songs and their demands on the audience; and the ways in which professional lyric singers encourage certain interpretations of their songs. The only study to examine a range of northern European lyric traditions as a unified group, Lyric, Meaning, and Audience in the Oral Tradition of Northern Europe will be of interest to scholars in medieval studies, literary studies, and folklore.
Visa hela texten

"Having so much comparative material under one cover is no small merit, and from this point of view the book will be of use to students of oral literature and its offshoots. In his ability to read and enjoy texts in so many extremely difficult languages DuBois may have no rivals." -Journal of English and Germanic Philology ". . . this book studies lyric song in the literature of northern European countries from Iceland to Finland. DuBois presents theory in the introduction; the six subsequent chapters take up subjects ranging from medieval religious lyric and lyric within the medieval epic tradition of Iceland, England, Ireland, and Wales to song in Shakespeare and songs of a living Irish singer from County Meath. This is a deep, penetrating exploration, and the range is extraordinary . . . Scholars and musicians alike will find this book a treasure trove." -Choice ". . . DuBois provides an interesting approach to the interpretation of folk songs from Northern Europe by establishing various axes that enable the reader to analyze the meaning and significance of these songs through various frames." -Western Folklore "Thomas DuBois's new book demonstrates an extraordinary range of languages and cultural traditions and should appeal to a correspondingly broad readership. He writes, too, for Everyman-a skillful elucidator of lyric in the clothing of a theory-oriented folklorist. DuBois's schema for tracking the various forms of reception and how they govern 'meaning,' especially in performed literature, is comprehensive, but the lover of individual poems will not find that they have been sacrificed to theory." -Joseph Harris, Francis Lee Higginson Professor of English Literature and Professor of Folklore, Harvard University "In his ground-breaking book, Thomas DuBois draws on studies in oral tradition and on literary approaches to make the case for a European lyric mode of wide-ranging breath. Students of medieval studies, literary studies, and folklore all will benefit from his work." -John Miles Foley, Center for Studies in Oral Tradition, University of Missouri

Thomas A. DuBois is professor of Scandinavian studies at the University of Wisconsin-Madison. He is the author of a number of books, including Nordic Religions in the Viking Age.