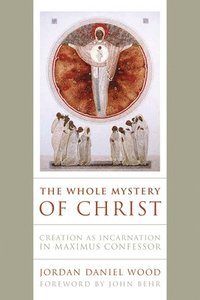 The Whole Mystery of Christ

Creation as Incarnation in Maximus Confessor

av Jordan Daniel Wood
Inbunden Engelska, 2022-10-15
758
Köp
Spara som favorit
Finns även som
Visa alla 2 format & utgåvor
A thoroughgoing examination of Maximus Confessor's singular theological vision through the prism of Christ's cosmic and historical Incarnation. Jordan Daniel Wood changes the trajectory of patristic scholarship with this comprehensive historical and systematic study of one of the most creative and profound thinkers of the patristic era: Maximus Confessor (560-662 CE). Wood's panoramic vantage on Maximus's thought emulates the theological depth of Hans Urs von Balthasar's Cosmic Liturgy while also serving as a corrective to that classic text. Maximus's theological vision may be summed up in his enigmatic assertion that "the Word of God, very God, wills always and in all things to actualize the mystery of his Incarnation." The Whole Mystery of Christ sets out to explicate this claim. Attentive to the various contexts in which Maximus thought and wrote-including the wisdom of earlier church fathers, conciliar developments in Christological and Trinitarian doctrine, monastic and ascetic ways of life, and prominent contemporary philosophical traditions-the book explores the relations between God's act of creation and the Word's historical Incarnation, between the analogy of being and Christology, and between history and the Fall, in addition to treating such topics as grace, deification, theological predication, and the ontology of nature versus personhood. Perhaps uniquely among Christian thinkers, Wood argues, Maximus envisions creatio ex nihilo as creatio ex Deo in the event of the Word's kenosis: the mystery of Christ is the revealed identity of the Word's historical and cosmic Incarnation. This book will be of interest to scholars and students of patristics, historical theology, systematic theology, and Byzantine studies.
Visa hela texten

"The Whole Mystery of Christ offers a brilliant interpretation . . . and both its novelty and its audacity will make for an intense and hopefully fruitful theological discussion in the years ahead. This book offers a new paradigm for Maximus scholarship and does it superbly well." -Hans Boersma, author of Embodiment and Virtue in Gregory of Nyssa "Wood's contribution lies not simply in his own speculative audacity, but also in an unremitting willingness to take Maximus at his word without lazily assigning the most challenging formulations to hyperbole. Consequently, this book provides endlessly rich material for reflection and argument. Wood's ingeniously original interpretation demonstrates that Maximus is still as revolutionary and enigmatic a Christian thinker now as he ever was, and that the real Maximus needs to be rescued from the sort of scholarship that has too often sought to tame his exorbitant genius." -David Bentley Hart, author of You Are Gods "Jordan Wood makes a compelling case that creation is itself 'incarnation,' the radical identification of the Creator not just 'in' the creation or 'with' the creation but 'as' the creation. Wood skillfully analyzes key texts in drawing out the ramifications of this thesis for Maximus's Christology, cosmology, and other aspects of his doctrine. The Whole Mystery of Christ will certainly engage important new discussion of one of the most prolific thinkers of the Eastern Christian tradition." -Paul Blowers, author of Maximus the Confessor