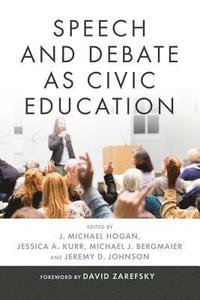 Speech and Debate as Civic Education

"An outstanding volume. Both wide-ranging and deep, Speech and Debate as Civic Education enlarges our understanding of intercollegiate debate by framing it in a historical context as well as by exploring its philosophical, ethical, and political possibilities. The essays consistently thematize gender, race, and culture, and together they paint a persuasive picture of why debate matters to education, and therefore to democracy. Anyone who cares about the role of rhetoric and argument in a deliberative democracy should own this book." -William Keith, author of Democracy as Discussion: Civic Education and the American Forum Movement "Presenting an unvarnished assessment of a compelling, proven avenue for enhancing civic involvement and responsibility, Speech and Debate as Civic Education traces the ubiquitous and long-standing value of speech and debate training for local and global audiences, for middle school to college students, for majority and minority participants, and for students educated in religious and secular environments. In short, this is an invaluable resource for educators and institutions alike seeking to find needed responses to our increasingly polarized world." -Carol Kay Winkler, Georgia State University