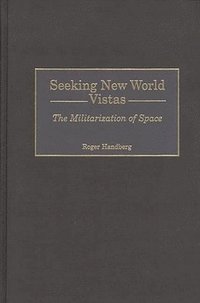 The Militarization of Space

av Roger Handberg
Inbunden Engelska, 2000-04-01
1136
Köp
Spara som favorit
The military is moving slowly but surely toward a world in which weapons will be stationed in outer space, and officials argue that these developments are essential to the maintenance of US national security in the post-Cold War world. Handberg explores these recent proposals for change and assesses the policy implications that might well result in a challenge to proponents for the militarization of space. Taking the reader through the first Sputnik launch and then the Gulf War, the first space war, Handberg introduces his audience to a broad overview of space as an arena for the conduct of military activity. He argues that the new policies are likely to result in a world that is less, not more, secure. Both technologically and organizationally, the Gulf War served as a watershed for military and political leaders. As a result, the great changes occurring across the spectrum of space activities, as well as the commercial applications of space, have become particularly critical to the field. Handberg argues that one unintended outcome of current policy decisions could well be a resumption of the global arms race as powers jockey for positions in the heavens. Too much of the current military advocacy is premised upon temporary advantages, both military and economic, which will dissipate in time. The political leadership of the United States must be fully engaged in this debate, given its crucial importance for future American national security.
Visa hela texten

ROGER HANDBERG is Professor of Political Science and Director of the Center for Space Policy and Law, University of Central Florida. His published work includes books on space policy (both US and comparative), articles on space policy, science and technology, defense issues, courts and law (both comparative and U.S.), and work on public opinion. He is the author of The Future of the Space Industry (Quorum, 1995) and coauthor with Joan Johnson-Freese for Space, the Dormant Frontier: Changing Paradigm for the 21st Century (Praeger, 1997).