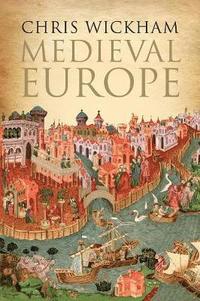 av Chris Wickham
(1 röst)
Häftad Engelska, 2017-08-22
140
Köp
Spara som favorit
Finns även som
Visa alla 3 format & utgåvor
A spirited and thought-provoking history of the vast changes that transformed Europe during the 1,000-year span of the Middle Ages The millennium between the breakup of the western Roman Empire and the Reformation was a long and hugely transformative period-one not easily chronicled within the scope of a few hundred pages. Yet distinguished historian Chris Wickham has taken up the challenge in this landmark book, and he succeeds in producing the most riveting account of medieval Europe in a generation. Tracking the entire sweep of the Middle Ages across Europe, Wickham focuses on important changes century by century, including such pivotal crises and moments as the fall of the western Roman Empire, Charlemagne's reforms, the feudal revolution, the challenge of heresy, the destruction of the Byzantine Empire, the rebuilding of late medieval states, and the appalling devastation of the Black Death. He provides illuminating vignettes that underscore how shifting social, economic, and political circumstances affected individual lives and international events. Wickham offers both a new conception of Europe's medieval period and a provocative revision of exactly how and why the Middle Ages matter.
Visa hela texten

"A dazzling race through a complex millennium."-Publishers Weekly "A timely consideration of an oft-considered subject . . . Wickham has managed to produce a volume which combines brevity with deep learning, compelling argument and an authoritative and even-handed tone."-Katherine Harvey, TLS "This bold, sweeping narrative covers the entire sweep of European history between the years 400-1500, focusing on important changes century by century, accompanied by illuminating vignettes which underscore how shifting events affected individual lives."-Bookseller "Medieval Europe is a remarkably detailed and readable book, and, at only 250 pages in length it is, unlike the Middle Ages, both brief and clear."-Dominic Green, Minerva "Writing with great wit, style and clarity, Chris Wickham presents to us a powerful account of the middle ages as a period of considerable dynamism and massive change. Emperors, popes, theologians, knights and mystics are found herein, but so too are cities, peasants, merchants, and the material experiences of the many and not just the few. Above all else, Wickham shows us the economic and structural bones beneath the skin. This is the middle ages that the twenty-first century needs to know about - not the gaudy antithesis of 'modernity' but the centuries of human toil, ingenuity and compromise in which real people made choices, albeit not in circumstances of their own choosing."-John Arnold, Professor of Medieval History, University of Cambridge "Medieval Europe is a model of clarity and accessibility, the superlative answer to a challenge taken up by an eminent and wide-ranging historian: to interpret the history of a millennium in 250 pages. This yields a sense of intellectual adventure that remains compelling throughout, as Chris Wickham engages his readers in his arguments, choices and interpretations, and keeps them on their toes."-Mayke de Jong, Utrecht University "This is tremendously good. Chris Wickham has an outstandingly keen and understanding eye for the diversities of life across a broadly-framed Europe, and for changes over time. Impressive geographic reach is combined with nuance, and a keen sense of the particularities of different historical landscapes. The author continually makes illuminating connections and comparisons, and does not flinch from offering clear judgments or nailing his own colours to the mast. Indeed, he has a consistently refreshing ability to get the reader away from predictable or ingrained ways of thinking about and judging things."-Len Scales, University of Durham "Fascinating, judicious, authoritative: by far the best single book about the Middle Ages. I wish this had been around earlier in my teaching career. Perhaps Wickham's most unusual accomplishment is that this survey never seems hurried. Without apparent strain, details and examples of historical trends are related to grand themes and changes."-Paul Freedman, author of Out of the East: Spices and the Medieval Imagination

Chris Wickham is Chichele Professor of Medieval History, University of Oxford. He lives in Birmingham, UK.