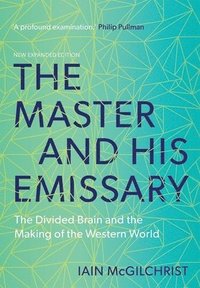 The Master and His Emissary

The Divided Brain and the Making of the Western World

av Iain McGilchrist
(1 röst)
Häftad Engelska, 2019-02-14
195
Köp
Spara som favorit
Finns även som
Visa alla 2 format & utgåvor
A pioneering exploration of the differences between the brain's right and left hemispheres and their effects on society, history, and culture-"one of the few contemporary works deserving classic status" (Nicholas Shakespeare, The Times, London) "Persuasively argues that our society is suffering from the consequences of an over-dominant left hemisphere losing touch with its natural regulative 'master' the right. Brilliant and disturbing."-Salley Vickers, a Guardian Best Book of the Year "I know of no better exposition of the current state of functional brain neuroscience."-W. F. Bynum, TLS Why is the brain divided? The difference between right and left hemispheres has been puzzled over for centuries. Drawing upon a vast body of brain research, the renowned psychiatrist, author, and thinker Iain McGilchrist reveals that the difference between the two sides is profound-two whole, coherent, but incompatible ways of experiencing the world. The detail-oriented left hemisphere prefers mechanisms to living things and is inclined to self-interest, while the right hemisphere has greater breadth, flexibility, and generosity. In the second part of his book, McGilchrist takes the reader on a journey through the history of Western culture, illustrating the tension between these two worlds as revealed in the thought and belief of thinkers and artists from the ancient to the modern, from Aeschylus to Magritte. He ultimately argues that, despite its inferior grasp of reality, the left hemisphere is increasingly taking precedence in today's world-with potentially disastrous consequences.
Visa hela texten

"One of the few contemporary works deserving classic status."-Nicholas Shakespeare, The Times "A landmark. . . It tells a story you need to hear, of where we live now"-Bryan Appleyard, Sunday Times "A seminal book"-Professor Ervin Laszlo, Huffington Post "McGilchrist describes broad [intellectual] movements and famous figures as if they were battles and soldiers in a 2,500-year war between the brain's hemispheres. . .A scintillating intelligence is at work."-Economist "A fascinating book. . . [McGilchrist] is a subtle and clever thinker, and unusually qualified to range with such authority over so many different domains of knowledge"-Harry Eyres, Financial Times "A veritable tour de force, gradually and skilfully revealed. I know of no better exposition of the current state of functional brain neuroscience"-Professor W.F. Bynum, TLS "Fascinating and elegantly written"-Grethe Hooper Hansen, Association for Humanistic Psychology in Britain Magazine "A densely researched and entirely thrilling examination of the difference between the two kinds of thinking typical of the right and left hemispheres of the brain"-Philip Pullman, New Statesman Winner of the Scientific and Medical Network Book Prize 2009 Shortlisted for the Bristol Festival of Ideas Book Prize 2010 Longlisted for the Royal Society Book Prize 2010

Iain McGilchrist is a former fellow of All Souls College, Oxford, where he taught literature before training in medicine. He now lives on the Isle of Skye, where he continues to write, and lectures worldwide.