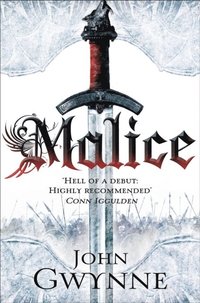 Book One of the Faithful and the Fallen

av John Gwynne
(2 röster)
Häftad Engelska, 2013-07-04
152
Köp
Spara som favorit
Finns även som
Visa alla 1 format & utgåvor
Called a 'Hell of a debut' by bestselling author Conn Iggulden, the epic fantasy, Malice by John Gwynne, is the first in The Faithful and the Fallen series. Young Corban watches enviously as boys become warriors, learning the art of war. He yearns to wield his sword and spear to protect his king's realm. But that day will come all too soon. Only when he loses those he loves will he learn the true price of courage. The Banished Lands has a violent past where armies of men and giants clashed in battle, the earth running dark with their heartsblood. Although the giant-clans were broken in ages past, their ruined fortresses still scar the land. But now giants stir anew, the very stones weep blood and there are sightings of giant wyrms. Those who can still read the signs see a threat far greater than the ancient wars. Sorrow will darken the world, as angels and demons make it their battlefield. Then there will be a war to end all wars. High King Aquilus summons his fellow kings to council, seeking an alliance in this time of need. Prophesy indicates darkness and light will demand two champions, the Black Sun and the Bright Star. They would be wise to seek out both, for if the Black Sun gains ascendancy, mankind's hopes and dreams will fall to dust. Continue the epic fantasy series with Valour.
Visa hela texten

'Influenced by Gemmell's Rigante and GRR Martin's Game of Thrones - two good strands of DNA. Great characters and plot - it gets faster and more fascinating by the page. All I want now is for the author to put everything else aside, including his health - and write two or three more as fast as humanly possible. Hell of a debut: Highly recommended' Conn Iggulden 'With its warring clans, sleeping giants, Banished Lands and omens and portents ... is a strong contender for the "if you like Game of Thrones, why not try this?" award' Independent blog 'Malice is easily one of the best fantasy novels I read this year, and one which will appeal to most fans of the genre' Iwillreadbooks.com 'It's exciting when you find a strong new voice ringing out through the halls of fantasy, and John Gwynne hits all the right spots in his epic tale of good vs evil, the first in the Faithful & The Fallen series ... there's a lot of pleasure to be had in this debut novel; Gwynne is definitely one to watch' SFX 'With three-dimensional characters, a gripping plot, and a world that became real to me, John Gwynne's Malice is a great debut. In short, this is the kind of fantasy I love to read and I truly can't wait for the next volume in The Faithful and the Fallen!' Fantasy Book Critic

John Gwynne studied and lectured at Brighton University. He's been in a rock 'n' roll band, playing the double bass, travelled the USA and lived in Canada for a time. He is married with four children and lives in Eastbourne, running a small family business rejuvenating vintage furniture. Malice is his debut novel.