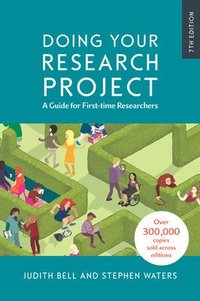 Doing Your Research Project: A Guide for First-time Researchers

this is the market-leading book for anyone conducting a research project, whether for the first time or as an experienced researcher honing their skills. Clear, concise and readable, this bestselling resource provides a practical, step-by-step guide from initial concept to completion of your research report.

A brand new first chapter outlining what it means to carry out research, the responsibilities of the researcher, the research journey, and the 'intentional' and 'unintentional' roles of a researcher.
An extensive update to chapter nine on using social media in research, to include ethical considerations and how the researcher can use and reference information collected via these platforms and create collaborative connections.
An online review of the latest tools for collecting and analysing both quantitative and qualitative data gathered from social media sites, such as Survey Monkey and Google Forms.
Further coverage on how to protect research participants, including advice from the NHS on how to conduct research in health-based settings.
More detailed coverage of how to conduct effective online literature searches, not only using Google but also other research-based search engines such as PubMed and professionally-focussed sites.
To support your learning, questions at the end of each chapter, which prompt you to reflect on your research journey.

this practical, no-nonsense guide is vital reading for all those embarking on undergraduate or postgraduate study, irrespective of discipline, and for professionals in such fields as social science, education and health.

'The latest edition provides extensive coverage of all that a research student might need to know. The expanse of the topics covered enables this book to be indispensable to a great range of students, not only at different levels of study but also in a variety of disciplines. Bell and Waters present an honest and practical look at a daunting academic undertaking and provide the student with a resource that is currently has no parallel. This new edition brings the text up to date with a look at some of the more creative approaches the research project might take and challenges students to think before making research decisions.'
Dr Susan Schutz PhD, MSc, RNT, RGN, Department of Nursing, Faculty of Health and Life Sciences, Oxford Brookes University, UK

Judith Bell's career in education began as a university lecturer, head of department and then vice principal in Further Education. Later she move to the Open University where she became a senior counsellor and course team writer, moving on to become one of Her Majesty's Inspectors of Schools, specialising in continuing education. In 1997, she was awarded both the MBE for services to educational research and the degree of D.Univ by the Open University for services to adult education. Stephen Waters has 30 years combined experience as a secondary English teacher, Head of Department and Assistant Headteacher and 5 years as a Secondary English Consultant with a local authority. Since 2011, Stephen has pursued a career in educational consultancy and business training, linking research-based evidence to inform good professional practice. He also works in Further Education as an assessor and quality assurer of apprenticeships.

The Researcher and the Research Journey
Approaches to Research
Ethics and Integrity in Research
Reading, Referencing and the Management of Information
Literature Searching
The Review of the Literature
The Analysis of Documentary Evidence
Using Social Media in Research
Designing and Administering Questionnaires
Planning and Conducting Interviews
Diaries, Logs, Critical Incidents and Blogs
Observation
Interpreting the Evidence and Reporting the Findings
Writing the Report